State of the Pointe Shoe
by President Kurtz

Red Pointe Shoe recently turned 2 years old and I, Lizy Kurtz, am still proudly designing and writing everything myself.

The posts have transformed from the recollection of my broke days as a starving college student to that of a college grad ranting about whatever topic is on my mind. I’m still broke and starving.

In the last month alone, I have had readers from 9 different countries.

Since I started keeping track of who is visiting the site back in October 2012, I have had readers from 22 different countries. New Zealand is the second-highest rated country, preceded only by the United States.

Below is a real-time report of page-viewers from February 15th. It means that at one moment in time, I had readers from all of the highlighted places below logging into RPS. Do you see your state? 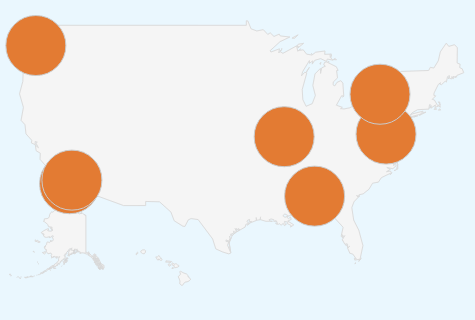 Most of my readers come from Southern California. The number one reader comes from Palmdale, which I think is my Aunt Paulette and Uncle Ted. The next few spots go to various cities in the San Gabriel Valley of Los Angeles: Glendora, Rancho Cucamonga, and West Covina are all very high-ranking. Potsdam, as well as many other cities and villages throughout New York, is the second-highest geographic region.

I have more readers in Southern California and New York than in Montgomery, which is where I design the blog from. That means there are more people looking at my blog from SoCal and NY than I am.

Below is a map of the United States. The darker the green, the more viewers I get from that state. 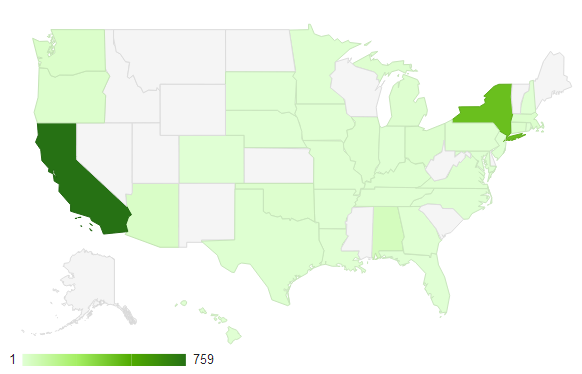 While every now and then a relative or family member will send a little money my way through the support page, I received my first donation this year from someone I do not know.

Although I started keeping tabs of which posts were getting read the most just after I had written it, A Letter to Becca easily received the most applause, with 13 likes and 1 share on Facebook.

The most-read blog, since I started recording page impressions in October 2012, is I Sinned, which was a recollection of my adventure in Vegas (go figure).

The blog I received the most negative feedback for is The Father, Son and Holy Spirit, in which I ranted in favor of Christians. The blog that shook people the most was I’m Sorry If I Offended You (but I probably won’t stop), in which I explained why I “defriended” my Uncle Ted on Facebook (again, I still love you Uncle Ted).

While I consistently receive comments both on Facebook as well as in the comments section, I received my first fan email this year from my very good friend Hannah “Bananjello” Meddaugh. I also received one boyfriend application from my good friend Patience Kapfer, which means she is my new boyfriend.

Page impressions have consistently gone up with every blog post. I am currently hitting about 100 pageviews in one day each time I post a new blog.

Since I started blogging in February 2011, the layout has transformed from this:

…to what you see before you now.

You have followed me on adventures to Chicago, Boston, Philadelphia, DC, NYC, Montreal, Ottawa, Oklahoma City, Las Vegas, Montgomery, New Orleans, and every city in California. In three weeks you’re following me to Raleigh.

You have read me gush about a cute guy in New York, you read about me dating him for close to a year and a half, and you were with me through the breakup (thanks for that, by the way).

Finally, and perhaps most interesting, you even watched my hair grow every week for an entire summer. If that’s not love, I don’t know what is.

The blog is growing as well as getting prettier. I still only have 28 “likes” on the Facebook page, but I seem to get a new one every now and then. I still don’t make any money from this and I have yet to convince people why they should keep reading, but for some reason they do. It’s things like posting a comment or telling me in person that the blog is awesome that keeps me going. Even when Taylor, Zach, and Mike hash it out on my Facebook wall about their thoughts on religion, which I may or may not have caused from my religion post, I love that I’m able to illicit such a response from people. I like getting you all thinking about the same things I’m thinking about. I like it when someone challenges me. Remember when I blogged about my fake parking permit, then several people told me it was a bad idea, then I went out and bought a new one? It’s interactions like that which keep me writing.

Keep being awesome. It’s hard to feel down when I know that readers from 22 countries have read my blog. Love y’all!