To those of you that were oblivious on February 8th, or are otherwise new to the site, I posted a boyfriend application for all those interested in winning my newly-single heart.

To all those who are completely new to my life, I recently broke up with my boyfriend of something like a year and a half. He did not submit a boyfriend application.

You can see the post and submit an application here.

These are the four people who have submitted applications so far, in the order I received them:

Patience K.
Patience went to SUNY Potsdam with me and also majored in Politics (hey, we have something to talk about! Good grounds for a relationship). She can “do almost anything whilst discussing politics,” including dancing. Not too shabby, eh? Last year I wanted to be Sarah Palin for Halloween, and I forgot why I didn’t end up being her. Anywho, Patience was Sarah Palin! I’m already falling in love. If she met my big brother, she would want to know what he would do if he was faced with a saber tooth tiger and a rabid peacock. I’d give Patience a solid A+. Our first date will be either snowboarding or taking pictures of signs in villages that are named after famous places and saying we traveled the world. 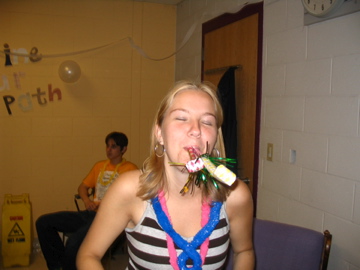 Ali is the only applicant who included a photo of herself, shown at the right. She majored in a few cousins of Political Science: you know, philosophy and the like. Good starting point for conversations; I feel like we will have many interesting philosophical and intellectually-stimulating debates. One of her special talents includes talking about Kelly Clarkson, and since one of mine is talking about Taylor Swift, I already feel like we understand each other on the grounds that we both have severe girl crushes on incredibly talented celebrities. She has the word “love” tattooed on her, and she has never been arrested, or even received a detention. She wants to talk about anything, even the weather, with my big brother. I feel like Ali and I would have a great time on our first date, which will be to a place we’ve both never been somewhere between Virginia and Alabama. A solid 10 out of 10 for Ali.

Corey B.
One of Corey’s names is “Asher,” which is totally cool and is something I didn’t know. He has no problem politicizing while dancing, though his moves are pretty fresh and require his full attention. His talents include being empathetic, rocking out on the drums, and he plays a mean ukulele. He is a huge Auburn fan, and has a personal goal of making my big brother an honorary Auburn fan also. I am glad to hear that he also plans on shit-talking USC with my brother; Matthew will be happy to hear that I am going on a date with someone who knows that UCLA is where it’s at. He didn’t include this on his application, but I happen to know that he has a cat named Aubie, named so after his favorite university. Corey and I will have a blast on our first date, which will be to a restaurant with a great view and really slow service so we can talk and get to know each other better. A perfect score goes to Corey.

Allonah EC (“Ace” / “Sugar Tits”)
Ace’s application just arrived in the mail today. It pretty much made my week. She is the only applicant to actually bribe me; she included a box of Girl Scout cookies and a bit of bribe money in her application (Sugar Tits: I don’t care that you called it “bagel money.” It’s bribe money). She also included a cover letter and a resume, which I must say is quite impressive. Allonah did not go out for Halloween last year, but she wishes she went out and danced her butt off with Karen and I. Allonah and I have plans of travelling all over the world together, and her most useful talent is that of languages. I hope her boyfriend doesn’t mind that she submitted an application to me. When my parents are on their way and the apartment is a mess, her plan of action is to shove everything in the closet, which is something I totally understand. She would love to meet my brother and is interested to hear about what he does in the army. Our first date will involve spinach and artichoke dip and lots of dancing, and maybe a moonlit walk through areas that have trees covered in Spanish moss. Needless to say, Ace’s application was perfect. Below are some images of the bribery: 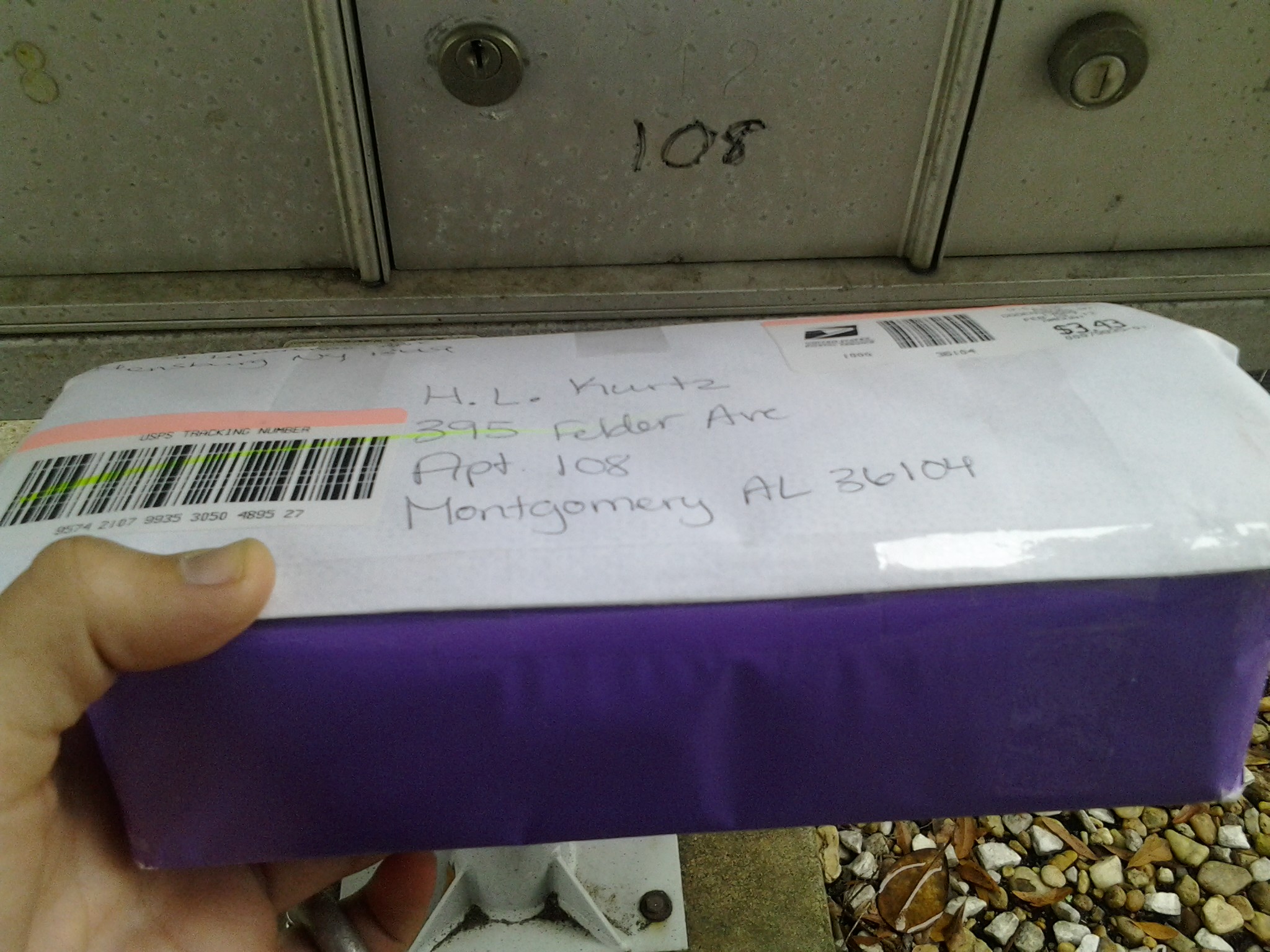 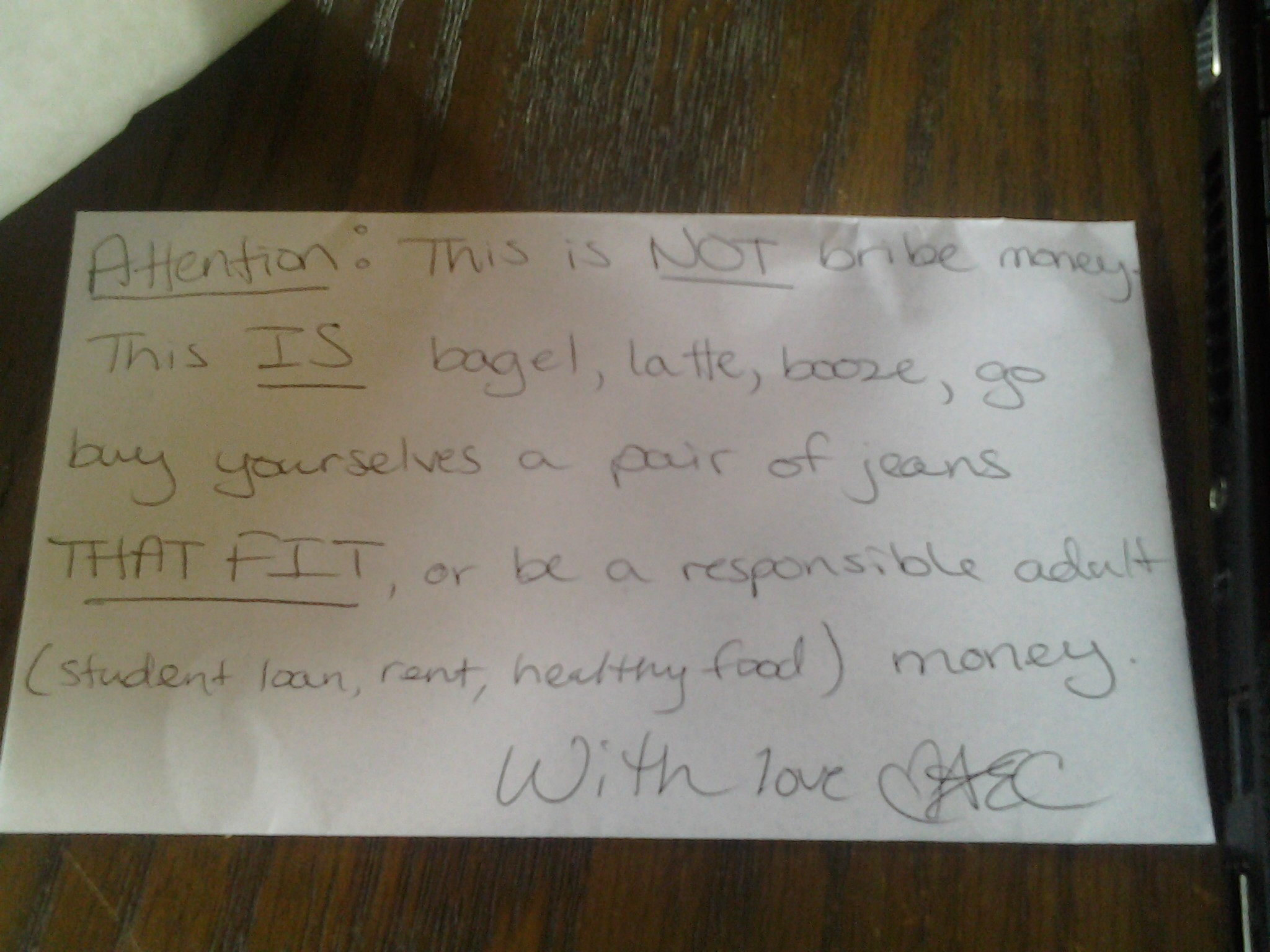 Oh my goodness, you are all so impressive. How the hell do I pick between a Politics major, someone who understands girl crushes the way I do, a man that has fresh dance moves that require his full attention, and the kid who bribed me? You all mentioned wanting to travel all over the universe with me, which is the most important requirement.

Until future notice, I’m still accepting applicants. Thank you so much Patience, Ali, Corey, and Sugar Tits for submitting such wonderful applications! I love you all so much and I can’t wait for our first dates.

I’m going to munch on my Girl Scout cookies while I contemplate this.