October 25, 2015
*Note: This post was originally written in early September. Since it’s writing I have killed the mouse and a family of them moved in, who I am currently battling. I’ve also found and killed a scorpion.

The setting for tonight’s post: I am sweating under my mosquito net and jumping at every sound while my only light is on in the next room and it will stay on until the sun rises and I don’t give a damn how much battery is drained as a result.

In the middle of training we each went to our respective permanent sites to spend a week doing nothing. I battled a scorpion and had the situation quite under control as I was standing on a chair throwing my water bottle next to it because I didn’t want to kill it but instead scare it away, when a Malian entered my compound then coolly took off his second-hand Wal*Mart quality flip-flop and slapped the shit out of it then picked up the remains of it’s body and left casually, like defending English-shrieking white girls from everyday pests was totally normal for him. I really didn’t have the situation under control.

This image has nothing to do with this post. I cut my own hair. I forgot to tell you.

During my first week of permanent living here I found a frog skipping about my house as if it either had no idea it’s existence was giving me a heart attack or it found a great deal of joy in this fact. I caught it easily and escorted it out of my house so it could go terrorize someone else.

Two nights ago I was minding my own business when I saw a rather large critter scurry across my floor. It was, I dunno, the size of you. The next bit is a blur but I found myself on a chair not breaking eye contact from the corner I thought I saw it go. If my eyeballs were correct, it hid behind my car battery, which stores my solar energy. Cables grow out of it like a spider web (I can battle spiders just fine, for the record) and it is a life source for my cell phone, my laptop, and my lamp.

I came up with the brilliant idea to throw a pair of dirty pants in it’s direction. If I hit the battery, I’d surely startle it into revealing itself. If I missed and hit the wall behind it, I’d still startle it out of hiding. Because I’m not good at sports, especially ones involving throwing pants at car batteries in an effort to scare mice out of hiding, I figured the hit-or-miss strategy was safe. I made my target and consequentially unclipped my light from the battery, leaving me to fend for myself against a human-sized rat in total darkness.

I groped around for a flashlight and was forced to approach the battery to re-attach the cables and flood my room with defensive light once more. I am not brave. My other option was to go screaming into the night, and the last time I did that a puppy scared me back into my own house.

LED light freshly illuminated, I kept searching for my enemy in the corner I believed it to be. It was not there. A horrifying thought washed over me as I considered the possibility that it snuck into the only other room, my bedroom, while I wasn’t looking.

I crept into my room, frantically shining my flashlight in every direction, Silence of the Lambs style. I left the LED light on in my front room because Allah made me a scardey cat and not the type of cat that can catch mice. I made it into bed and quadruple checked to make sure my mosquito net was sealed on all sides. I had no choice but to text Daniel about how scared I was and then try to go to sleep.

That was two nights ago. I spent the next day tip-toeing around corners and convinced that everything was out to get me. I shoved a rock in a hole I found in the wall near the car battery. I taped down the rock. I didn’t see any mice that night. I went to sleep.

I woke up. I had a bad day. I came home. My house is already a mess again. I sat down to finish Harry Potter, which was interrupted two nights prior by the long-tailed intruder. The credits rolled, and on cue the mouse re-emerged. It ran to the car battery then changed it’s mind and turned around and darted into my goddamn bedroom. Don’t worry, I was already back up on a chair at this point, this time with my cell phone in hand to send thousands of terrified
texts to Daniel.

And people ask why I couldn’t have served my country by joining the military.

I’m not good at measuring time while busy fighting for my life, but after implementing a great deal of various defensive maneuvres my host mother came by and stopped in when she noticed my light was still on and it was after 8pm. My sneakers were on because it seemed like a good idea to fight mice while wearing sneakers. Even though the light was on, I clutched my flashlight tightly in my hand for optimum vision. I was sitting in my chair by this point, facing the entrance to my bedroom. It didn’t take a genius to conclude that, at that moment, my life was a mess. 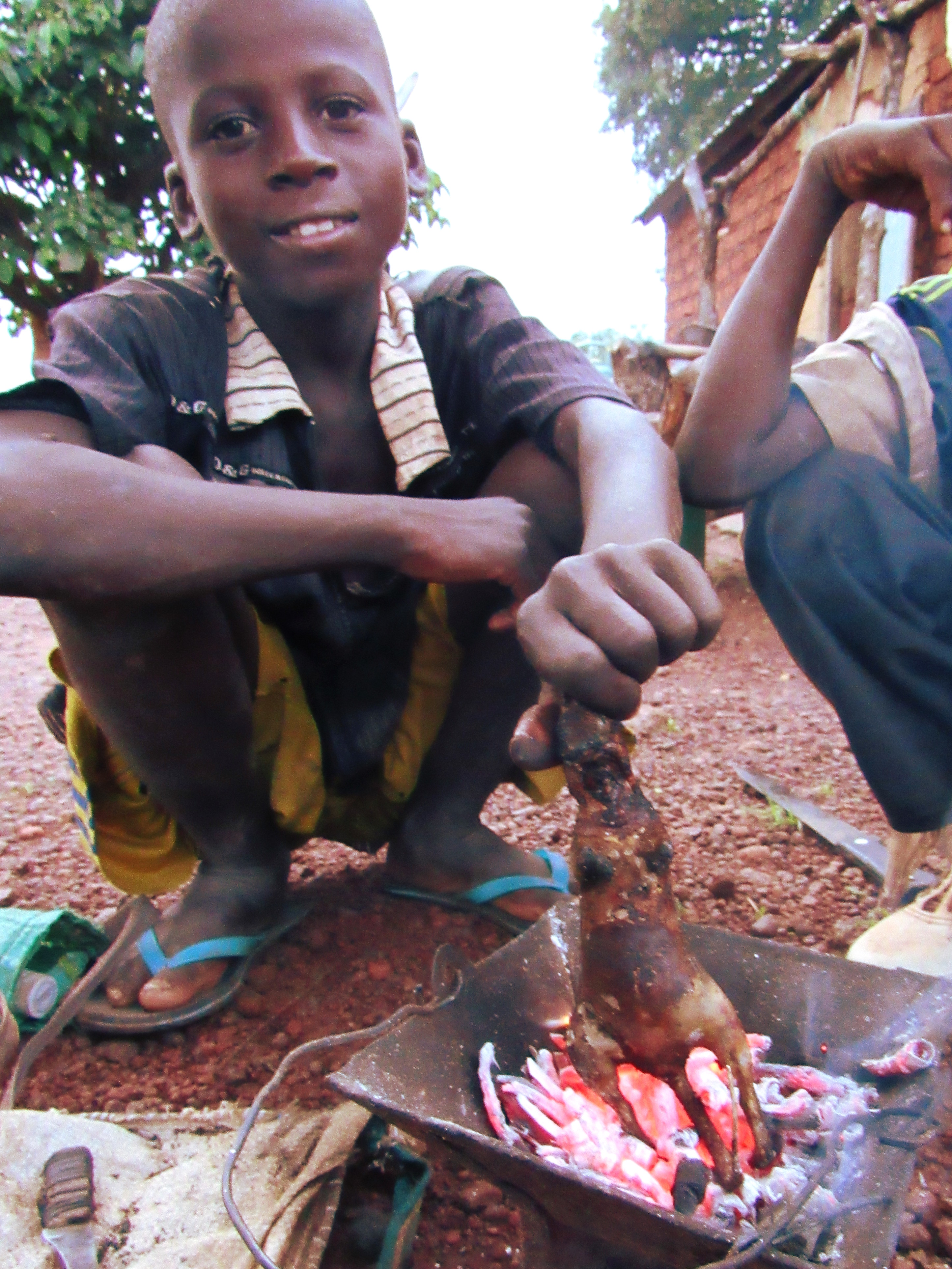 The day I learned the word for mouse. Dinner!

Four days ago some kids cooked a mouse they had hunted and I took pictures of their dinner, which my host family found hilarious. Lucky for me, I learned the word for “mouse” that day. It turned out to be a quite handy word as I was able to properly glue together the following sentences in Bambara: “I saw a mouse in my house. It ran into my bedroom. It is there. I am scared.”

And to think that four months ago my best skill was making a cocktail called a “meximelon” without looking at the recipe.

My host mom was all smiles as she repeated that mice don’t do anything to people. She then walked me to her house to show me the holes in her walls where mice come from all the time. She showed me her sleeping children (sidenote: Why the hell weren’t they sleeping under a mosquito net??) and the holes where mice come from in their room. She showed me the dead mouse near them, an unusual site since Malians are the tidiest people I’ve ever met. She immediately disposed of it and walked me back to my house. She repeated that mice don’t do anything to people and that they’re all over the place. She said there is a poison I can buy at next week’s market that will take care of it if it continues to pester me. She checked my room again and then made absolute sure I understood that mice are harmless.

Before my host mom came, I had asked Daniel to look up a mouse’s ability to chew through my tent, because I was planning on setting up shop outside for the night and possibly the remainder of my two years. After seeing her perfectly calm reaction to the dead mouse next to her unprotected sleeping children and showing me the ROUS-sized holes in her own bedroom, I’m sleeping in my bed tonight, and there might still be a live mouse in here.

Amazing how calm she was. Mice are so normal for her. She asked if they were in America, and I said yes, but not usually in houses. She said since they don’t harm people, what’s there to be afraid of?

What an incredible question.