This post references depression and contains some inappropriate language. No getting mad at me for saying how I feel the way I feel it needs to be said.

So I’m going to my village, after all. I cried when I found out.

I asked you all to hold off on getting mail to me because the mail system was down. I lied. Peace Corps Mali was being considered for an evacuation, and I hadn’t yet moved to my village, and so I didn’t want things to get shipped to me if I wasn’t going to be there to pick them up.

Today, after a week of our lives being on hold and entertaining ourselves with endless Settlers of Catan games (and a few bottles of alcohol), we were finally given the green light to travel to site. We were also told we had only a matter of hours to pack, but that’s an entirely separate complaint.

Only days before we were scheduled to be sworn in as volunteers (we’ve been trainees up until recently), we had a meeting with the Big Wigs. In addition to terrorist activities picking up in the north (not surprising), there had also been a strike in the south (unprecedented). The strike in the south took place in the region all 28 of us are headed.

Peace Corps Mali was evacuated in 2012 due to an unexpected and poorly-planned coup d’etat. My fellow volunteers and I are the first group to re-enter the country. If we last our entire two-year commitment without being evacuated, we will be the first Peace Corps group in history to successfully re-enter a country after volunteers had been pulled due to a military coup.

As you can imagine, the general attitude is that we won’t last until August 2017. But damn, this group has spirit. My peers have showed no hesitancy in expressing their courage and commitment to our security officers, to our country director, and even to the United States Ambassador.

As a result of the recent jihadist activities (yes, jihadist), our departure to our permanent sites was delayed for about a week. Theories spread and the wheels spun as we each theorized over what the final decision was going to be.

In the guiltiest recesses of my mind, I prayed for everything to be over and for them to announce that we would be going home. Please don’t hate me for saying that. I have a partner and air conditioning and electricity and toilets waiting for me in Montgomery, Alabama. I fantasized about getting to help Andrew at this year’s Dragon Boat Festival. I dreamed about surprising Becca for her birthday.

A month ago we visited our permanent sites for a week and it was, without a doubt, the single hardest fucking week of my life. I found rock bottom when I was crumpled up on the floor, starving, bawling my eyes out. The rain was deafening on my tin roof. The overcast day did nothing for my solar panels, which caused my light to be incapable of emitting no more than a miserable flicker next to me.

I have never been diagnosed with depression. I’ve never needed to pay a professional to tell me that my family history and my dark and violent mood swings are pretty good indicators that Allah messed up somewhere in my DNA make-up. This past week, while caught up in this sort of limbo of not knowing if I was heading to America or heading to my village, I’ve been stuck in a pretty bad funk. Go figure.

The truly incredible thing about the day’s announcement is that, had we been told that I was going to go home, I would be escaping a reality that millions face for their entire lives. Except their environmental stress is accompanied with starvation and disease. Oh, and these are the exact people I’m here to help.

I am stressed. I am depressed. I feel guilty for secretly hoping that reasons beyond my control were going to send me back to Daniel. I am incredibly proud to be a part of this group of volunteers, who are so bravely moving forward into this politically turbulent country because they believe starvation and famine and al Qaeda and the oppression of women are things worth taking a stand for, even though the only thing we are equipped with is the local language.

Settling into my new place is going to be hard, and there are going to be a million things to figure out before I stop being crumpled up on the floor in a miserable mess.

I’m not sure if I’ve discovered new found courage, or have just developed an extremely high tolerance for dealing with shit, but I’m taking a deep breath and stepping on that bus to take me south (on a date I can’t tell you because…bad guys). Admittedly, I knew there were issues here, but this isn’t what I thought I was signing up for. But we never really know though, do we? That is the odd nature of us being here; that, while these emotions are new to us, they aren’t new to the people we’re here to help. 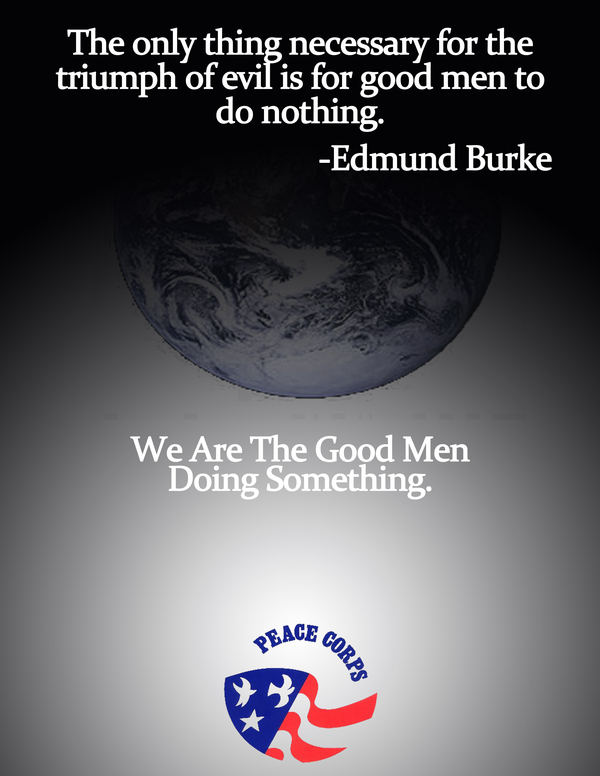 The slap in the face I just received is that when trouble is a-brewin’, all the bad guys need to wreak havoc is for the good guys to run back to their air conditioning. Our security officer, the United States Embassy, and Washingtion, D.C. all agree that the southern region of Mali is safe for 28 unarmed Peace Corps volunteers to teach people about proper hand washing. And we trust them. And so we move forward to do our job.

All this to say, the Liz that misses America lost today, and the Liz that wants to make a difference won. And it’s scary, and growing up is painful, and I wish I could irritate my partner for just one day, and I can’t wait to start my garden here, and I plan on sending Nurse Ian lots of pictures of everything I see with my fancy new camera that is waiting for me in my mailbox in Sikasso because the mail system never went down.