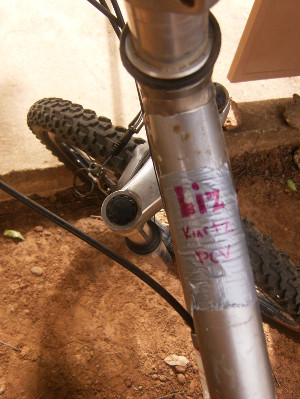 Minor difference between the military and the Peace Corps #21: The government issued my brother a tank, but issued me a bicycle.

stuff, stuff, stuff
I have a cold. It’s a hundred degrees every day, I live smack dab in the middle of West Africa, I’m a health volunteer, and I have a cold. And you all laughed when I insisted on packing the Dayquil.

My mid-training language assessment was yesterday morning. It was especially fun because of the copious amount of snot pouring out of my nose. I’m fairly certain I was awesome anyway.

Immediately after it I headed back to my house to pack for our first visit to our permanent sites. We needed to haul enough supplies to keep us alive and healthy for a week, including our mosquito nets, water filters, entire medical kits, and bikes. “Take only what you can carry” suddenly became “take only what you can carry while biking.” We are told that our Malian counterparts will be able to help us rent a donkey cart when we permanently move in, which makes the task seem significantly less daunting. But also even more foreign…because donkey carts.

Now might be a good time to explain the necessity of our bikes: these aren’t to make accessibility to our surroundings a little more comfortable. Rather, some of our villages, including my own, are only accessible by bike. Because, yes, these villages are that remote.

We wedged our already tight-fitting crowd, made even tighter by the addition of such necessities as water filters and bicycles, into the familiar bus that has been escorting us from our training villages to the training center.

All of our bikes on top, all of our luggage in the back, and all of our water filters squeezed in among us wherever they would fit. And then we picked up another villageful of volunteers, doubling our load and making our bus look even more ridiculous.

An hour and a half later we found ourselves back at the training center. My mood was pretty low due to my cold (my worst symptom every time I get sick is always my lousy attitude), and then…

our permanent sites were announced
My excitement to learn more about my site didn’t fully manifest until I was handed my packet telling me everything I needed to know about the village of Glendora, located in the Sikasso region on the Burkina Faso border. It is not actually called Glendora, of course, but because I am not sure how safe it is for me to announce my specific location, we can call it Glendora for now. Makes it feel more like home.

Glendora is comprised of either 600 or 1,100 people, depending on who you ask and which packet of information you’re looking at. The population is Muslim (no surprise there given that 90% of the country is Muslim), and their main language is Senefou. No French is spoken there, though they do understand Bambara, which means I’ll be picking up a little of a fourth language while I’m out here.

Unlike almost all of the other volunteers, my compound will be separate from that of my host family’s. I made a special request for this because finding out just how much I value my alone time has been one of the bigger lessons I’ve learned since my arrival. My current host family is absolutely fantastic, but my bedroom opens up right into their main living space in the middle of the compound, and I have found my lack of privacy to be a challenge.

700 years ago, Malian leaders established a “joking cousin” relationship throughout the entire nation as an internal peace-keeping strategy.

Farting is never ever ever talked about in Mali, and since the knowledge of beans being a musical fruit is apparently universal, accusing your joking cousin of being a bean-eater has become a Malian favorite in the arsenal of jokes.

My host family’s last name will be Coulibaly, who is a joking cousin with all other last names. My options are to keep Diarra and joke with all of the community, or switch to Coulibaly and joke with the entire country except for other Coulibaly’s (but perhaps bond more with my host family). You can understand the dilemma.

what’s in a name?
With the relocation from our training villages to our permanent sites comes the opportunity to change our names. Some have spoken about changing their last names to either reduce or maximize “joking cousin” potential based on the predominant last names of their permanent sites. Few have spoken about changing their first names because they were named after a family member they weren’t very fond of. Because my namesake is such an incredibly hard-working lady, and because I’m about to move to a village full of nothing but the last name I’m supposed to accuse of being bean-eaters, I am currently leaning towards keeping all of my original name.

The benefits of having a joking cousin everywhere means that when I don’t know what else to do with the conversation I can at least accuse the person I’m talking to of being a donkey or sling some other ridiculous accusation at them. Malians love to laugh, and I love to make people laugh, so I’m going to start stocking up on Malian jokes right away. I am told that, unlike in America, “You are my slave” is an entirely acceptable joke to make.

The downside to being surrounded by the enemy clan (their last name is Traore) is that it will take me roughly three times as long to get to the point of any interaction as it would if I wasn’t obliged to throw insults at a person’s family before asking them if they wash their hands after having a bowel movement. At the end of each day I will likely return home exhausted and irritated, but at least I’ll make instant friends with everyone in the entire the village as the kid who will likely be the only Diarra for miles.

As if being the only white, non-Muslim, English-speaking, unmarried adult female won’t be adequate enough attention.

homologues and humbugs
Ok, I’m picking up writing now from the next day. Last night, after writing all of the above, our counterparts began trickling into the training center. The relationships with our counterparts will vary from direct supervisory-type relationships to a true community partner. Because my village is out in the sticks the work I’ll be doing will be entirely community-based, and so my counterpart will be more like an equal partner who will just make sure I don’t do anything too embarrassing. 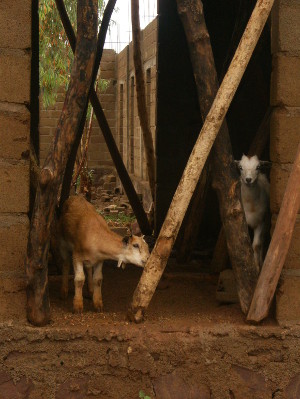 Some goats wandering around a construction site, making sure things are kept tidy.

I was incredibly nervous about meeting my partner, or homologue, as we call them. Daniel couldn’t understand what I was saying on the phone when I first explained the homologue relationship to him and he thought I was saying the Peace Corps would be giving each of us a “humbug,” which I find to be a much more adorable word.

Anywho, I was nervous about meeting mine because he is a farmer with two wives who doesn’t speak any French, which means I would have to rely on carefully gluing together my little knowledge of Bambara over the most awkward dinner of my life and figure out how to ask about his family without being offensive. In Mali, the words are “women get married” and “men have wives.” Never “women have husbands” or “men get married.” It’s incredibly stressful for me when meeting a Malian to figure out the most appropriate way to ask if they have a partner and, if so, how many.

I was hiding from him long enough when dinner finally rolled around and those of us who hadn’t yet located our humbugs were introduced to them. One by one our relationships were announced, and then my turn finally came around.

The initial handshake and greeting was short and sweet. We broke for dinner and all of the Malian men assumed their positions at the front of the line while the female humbugs took theirs at the back. Us American hooligans had the audacity to mix together.

The main dinner entree was a hunk of bone-in chicken. Most of you know my hesitancy with meat and my uncertainty when it comes to eating anything other than highly-processed, boneless, Frankenmeat. After moving through the line I hunted down my humbug and made sure to get a seat with him so we could attempt to get to know each other.

After sitting down I confirmed that his last name was that of my joking cousin. I looked him in the eye and accused him of being a bean-eater. He was sleepy and didn’t laugh nearly as much as I was hoping he would.

Fumbling equal parts over my broken Bambara and my bone-in chicken, I attempted to ask my humbug questions about our village. He’s of the belief that it has 600 people. He has 4 children. He laughs when I correct my peer’s Bambara and shows hesitancy when I say I speak French. He only speaks Bambara and Senofou, which means I’ve been stripped of my French crutch and that I have a lot to learn between now and August 17, 2017.

The dinner conversation quickly slowed to a crawl, I gave up on picking apart any more meat from my bird, and Humbug decided to turn in for the night.

I will be living in a village smaller than Potsdam, working with a man who has two wives and who does not share a common language with me. I will be wandering around Glendora, accusing people of being bean-eaters, and maybe helping with water sanitation or nutrition along the way.

This Sunday I will travel by bus with Humbug to see Glendora for the first time. I will stay there for roughly a week and will spend my time meeting village leaders, including the village chief, and maybe my host family. I will then come back to the training center for a couple of days before heading back to my current training village. A few weeks after that I will be officially sworn in as a Peace Corps Volunteer.