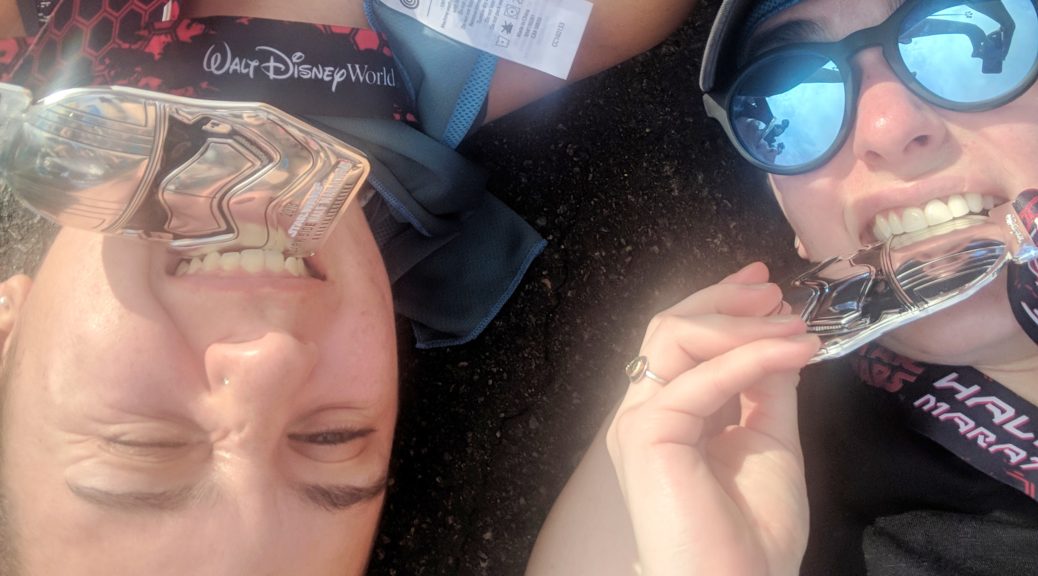 Look people, I just ran a half marathon and I’m feeling pretty on top of the world about it. But before we begin, I think we all deserve this imagery of me enjoying a churro like it’s the most magnificent thing to have ever graced the inside of my mouth: 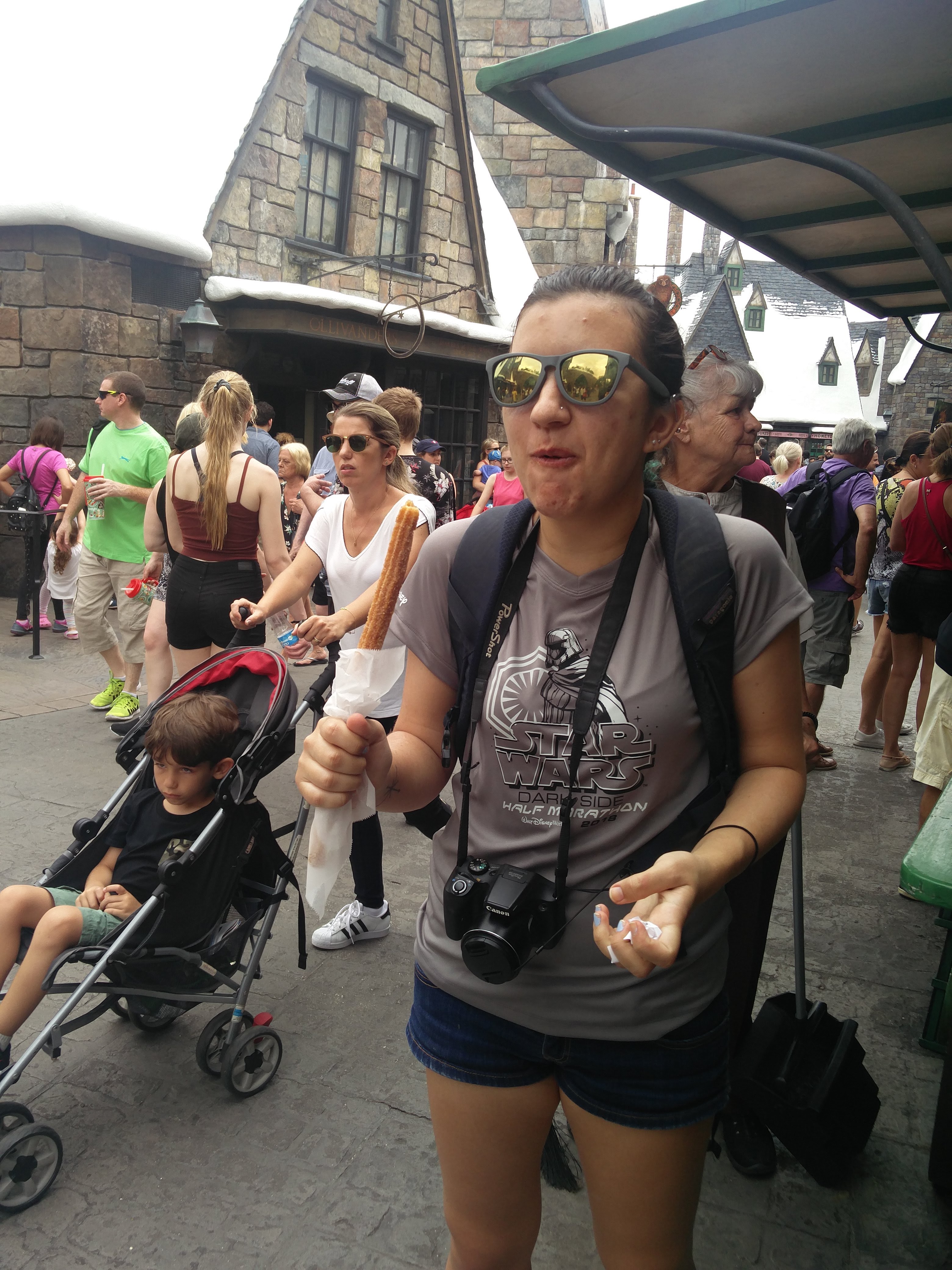 Now let’s get down to business. To defeat. The Huns.

It all started a few weeks ago when Rebekah and I signed up for the Star Wars Dark Side Half Marathon.

Our goal has always been just to cross the finish line, whether that means walking or crawling or having someone carry our dead bodies across it. A half marathon is 13.1 miles. We had each only ever ran 8 miles. We were either really stupid or really optimistic but we figured we’d commit to running at least 8 and then walk whatever we needed to.

We woke up at 6 AM to practice waking up early. We made pancakes. I worked a double and got home by 10:30 PM. I stayed up to crank out some homework ahead of a Sunday due date and was asleep by midnight.

We left Montgomery at 3:30 AM to catch a flight out of Atlanta (two hours from Montgomery). Our friend and cheerleader, Andrew, generously drove us. 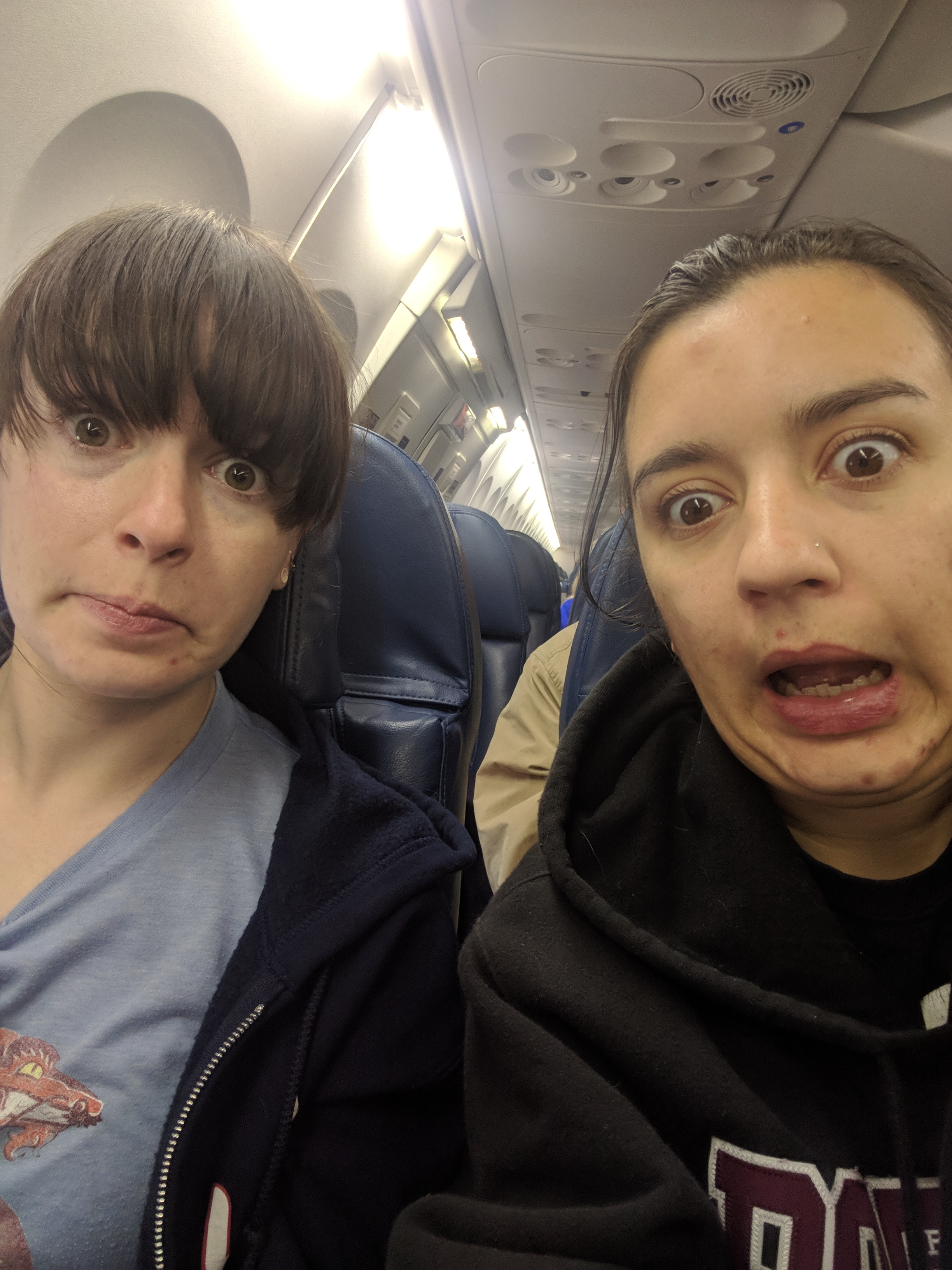 Rebekah and I on the flight to Orlando

We arrived in Orlando around 10:30 AM. Our hotel room was not yet ready so to kill time we headed over to the ESPN Sports Complex to pick up our super important race registration stuff. We got our bibs and our official shirts. 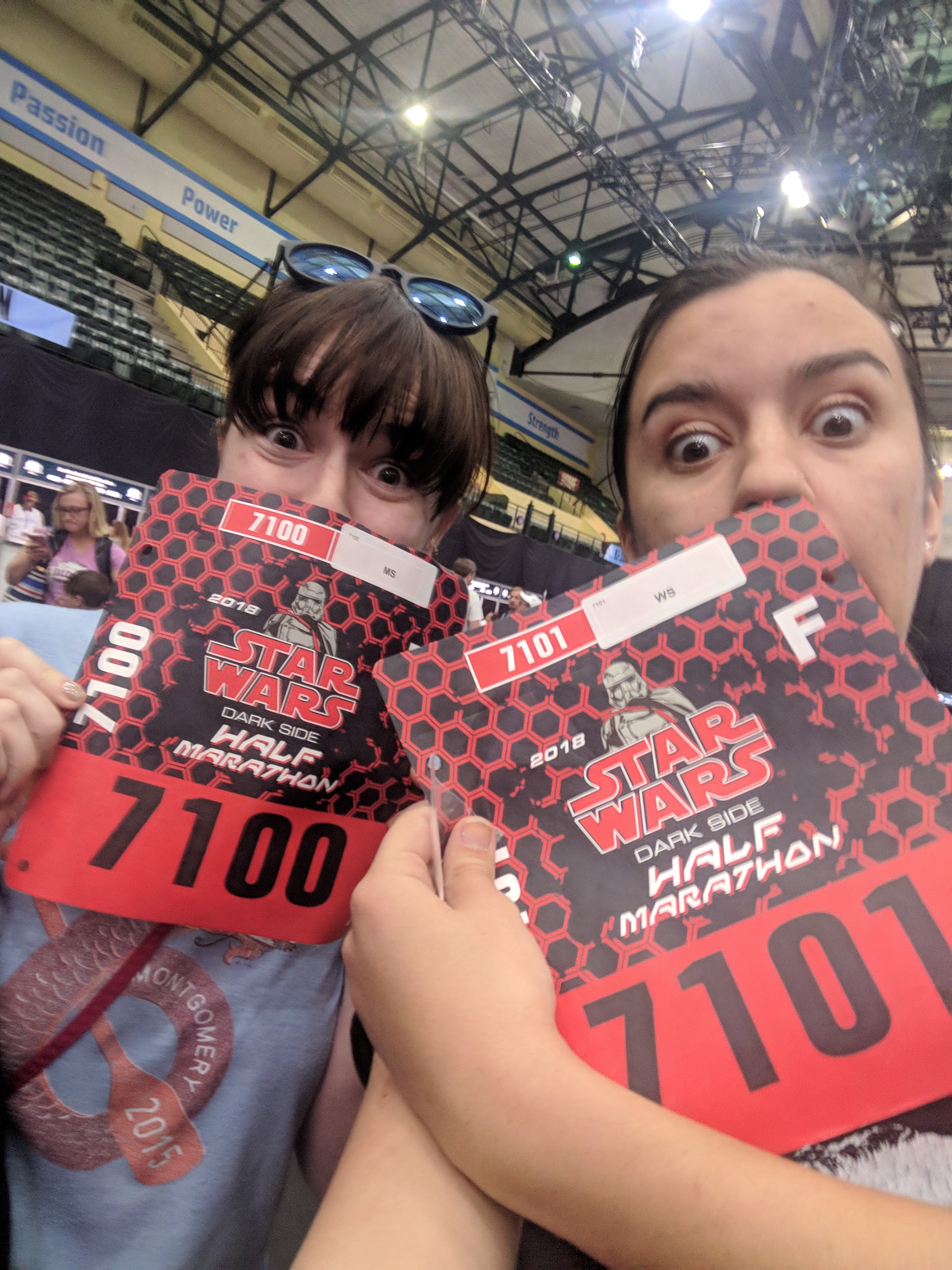 There was so much energy throughout the expo. Lots of vendors and runners and kids who had just completed the fun run. Having woken up at 2 AM we were running on fumes, but needed to power through so that we could sleep at a proper hour that night. We strolled through the crowd and checked out everything there was to see. 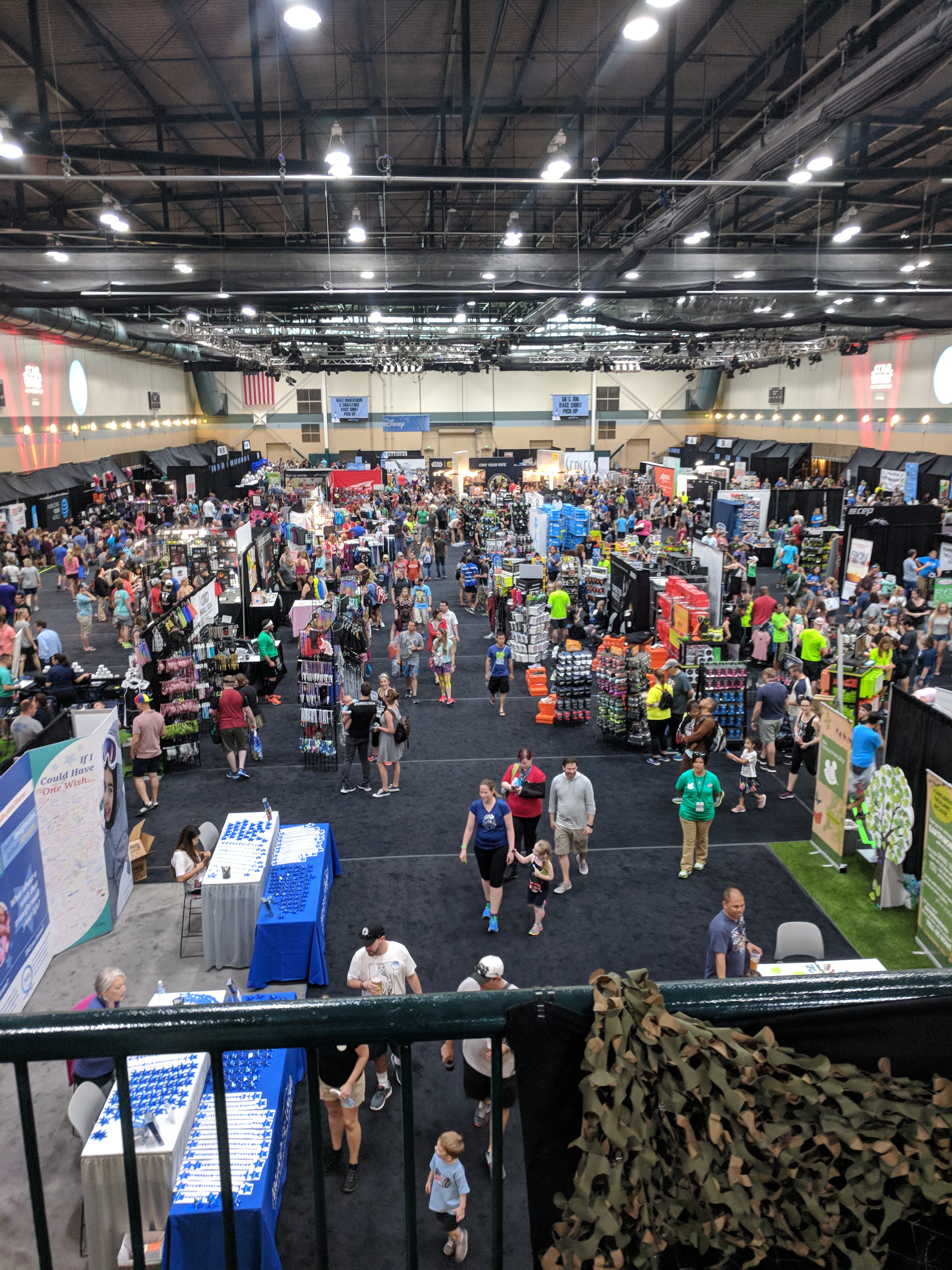 I met a running legend and just about cried. Meet my new friend, Jeff Galloway! 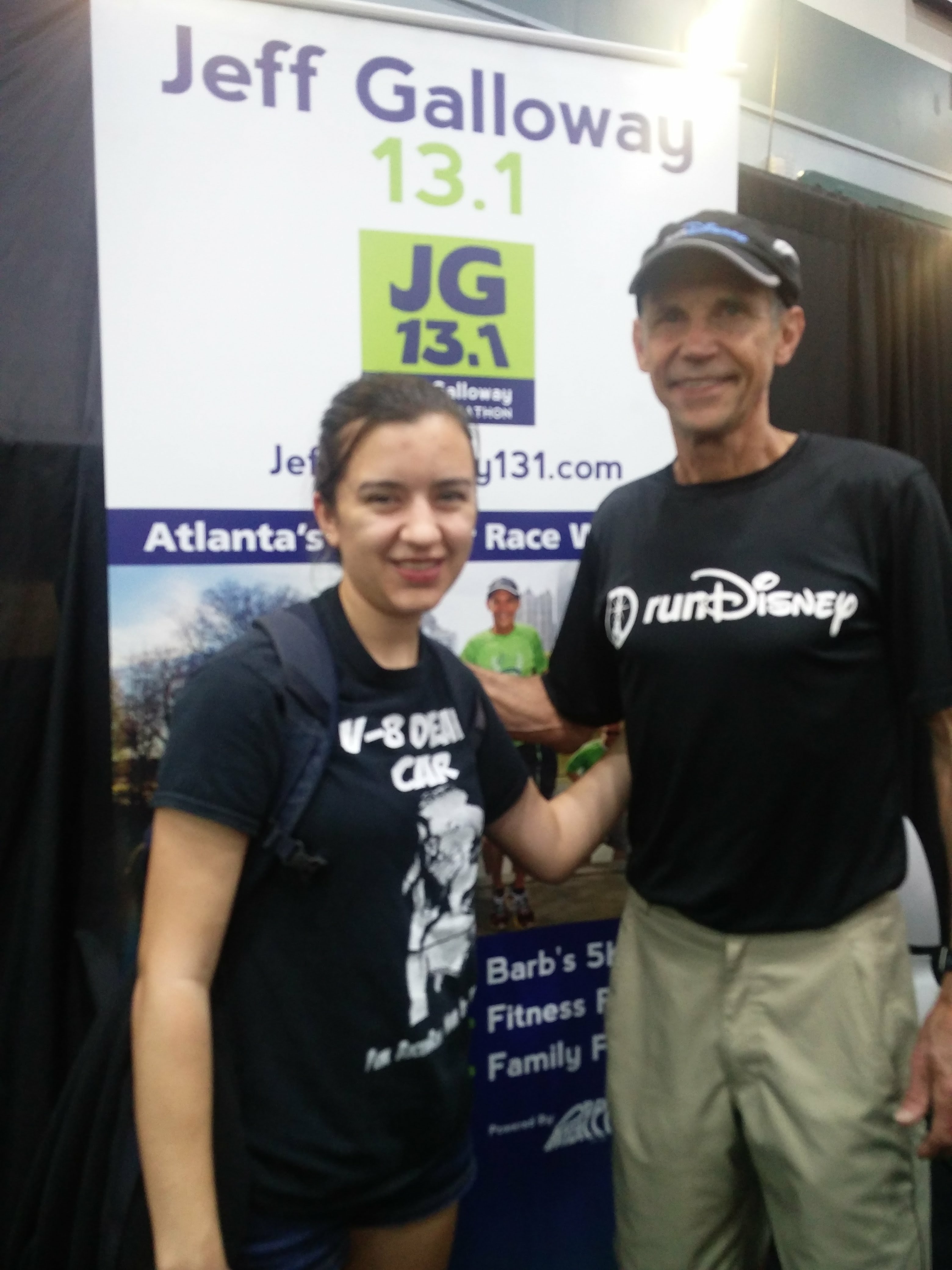 This guy is an Olympian and is super nice and wants to help everyone get into racing. His website is Jeffgalloway.com.

Bibs in hand and feeling an ever growing sense of “is it too late to change our minds,” we then headed to Disney Springs for the sights and some pre-race fuel. Remember: we were feeling like garbage at this point. We had zero sleep from the previous two days and were forcing ourselves to stay awake in order to get to bed early. We were stinky zombies.

In the name of racing energy, we stuffed our faces with pizza and poutine. I love carb loading.

We woke up at 2 AM. We got dressed, sipped some coffee, read all the beautiful things you sent us on social media, and made it over to the Disney World parking lot by the recommended 3:30 AM arrival. Powering through our diminished energy the previous day and training our bodies with early morning pancakes on Friday had paid off: we were awake and fueled. 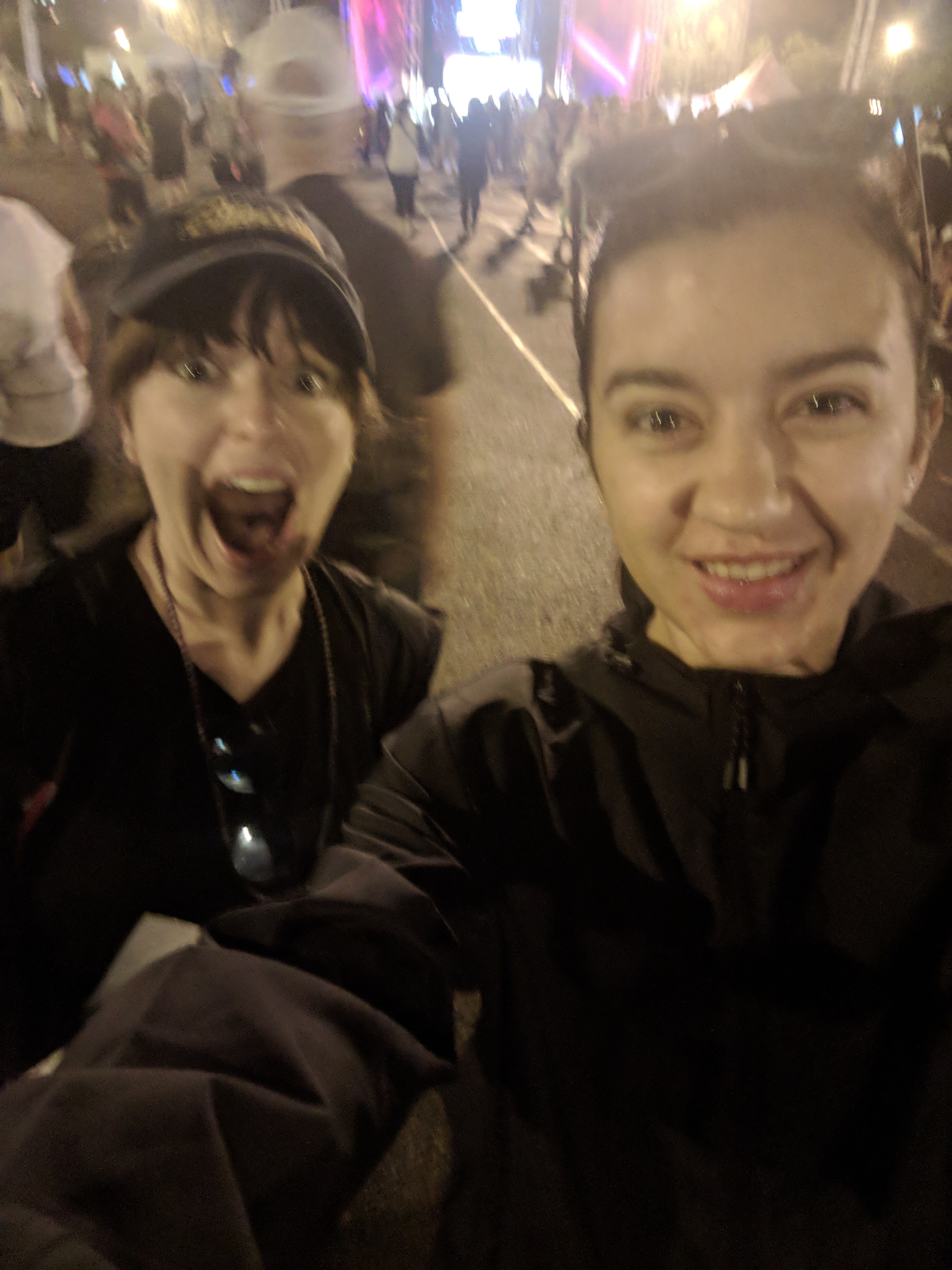 Fifteen thousand other racers, each one in a more impressive Star Wars outfit than the last, were milling about as we all anxiously awaited for this thing to just get started already. There were two stages, charismatic hosts on big screens, and as much geekdom as you would expect from a Disney Star Wars event. Athletes even stood in winding lines to get their pictures taken with the various representatives of the Empire. Rebekah just would not stop drooling over Kylo Ren.

We felt like imposters. We had only ever ran 8 miles.

We made sure my hair was set up in perfect Rey buns. Because, if you’re gonna do the thing, you gotta do the thing right.

The time indicated it was time for all fifteen thousand of us to get into our respective corrals. We spent the remaining thirty minutes stretching and allowing the hosts on the big screen to distract us. We steadily grew quieter as the end of our lives loomed closer.

The race started. Corral A was released and you know what? They were going way too fast. Those torpedos shot across the start line.

We were towards the middle of Corral F. We waited as fireworks launched to announce the start of each consecutive group.

Corral B was released. They were also starting too fast; I would be the slowest person there for sure.

Corral C was released in several groups, as it was much larger than the first two.

Corral F: holy, crap, this is us. We didn’t know which group we were in but we did know our Spotify and my running app wasn’t working, which was probably the least good thing to happen in that moment.

Corral F part four was released, and Rebekah and I officially began our race. *shivers*

I was relieved to see there were already walkers right off the bat. You know, people who were just there to have a good time and not run for 13 miles, because WHO DOES THAT. As the crowd spread out, the cell signal cleared up and my running app along with my music came back. Whew!

For quite a while after we were released, we heard the fireworks going off to announce the start of each corral after us. It sounded like the cannons that go off in Hunger Games to announce another player had died. Only in this version it was thousands of people and they were excited to be there for some reason.

Endless mantras filled my mind as I steadily reminded myself to go as slow as possible, to feel comfortable, and to not hurt myself. I was dedicated to making at least 8 miles and I would be damned if I ran anything less than that. Photo ops lined the side of the course with the various Star Wars characters and runners actually stood in line to get their pictures with them. What!?

The race began at the Disney World parking lot and pretty soon took us inside the park. We wound through skinny paths that forced us up against other runners, we ran along the interstate, and we ran past all sorts of entertainment, including some pyrotechnics.

Powerade stations lined the course about every mile and a half to two miles, and I granted myself permission to walk the fifteen feet or so it took me to drink mine. No matter what discomfort I was in, I had to complete 8 miles. Someone could carry my carcass the rest of the way.

Mile 8 eventually came and you know what happened? I survived it. I kept going.

At mile 9 we took a sharp turn up a bridge that allowed you to see the course both behind and ahead of you; throngs of athletes were visible in both directions as far as you could see. The sun had risen by now and traffic was lining the roads alongside us goofballs who had already been running for several hours.

Mile 10 came and I still had energy. I picked up the pace.

My average pace was molasses slow; faster than walkers but slower than runners. My official finish time is 3:05, which is about a 13:30 pace. My only pauses for walking came the several times I drank my Powerade.

I straight up ugly cried. I did it.

Athletes were immediately handed all sorts of wonderful things on the other side. The first and most important was a full bottle of Powerade, which I was too weak to open. An elderly volunteer took pity and helped me out. We got our medals, snack boxes, bananas, and more fluids. Bodies lined the side of the road to stretch out muscles and send SnapChats of their accomplishment to everyone they’ve ever met. 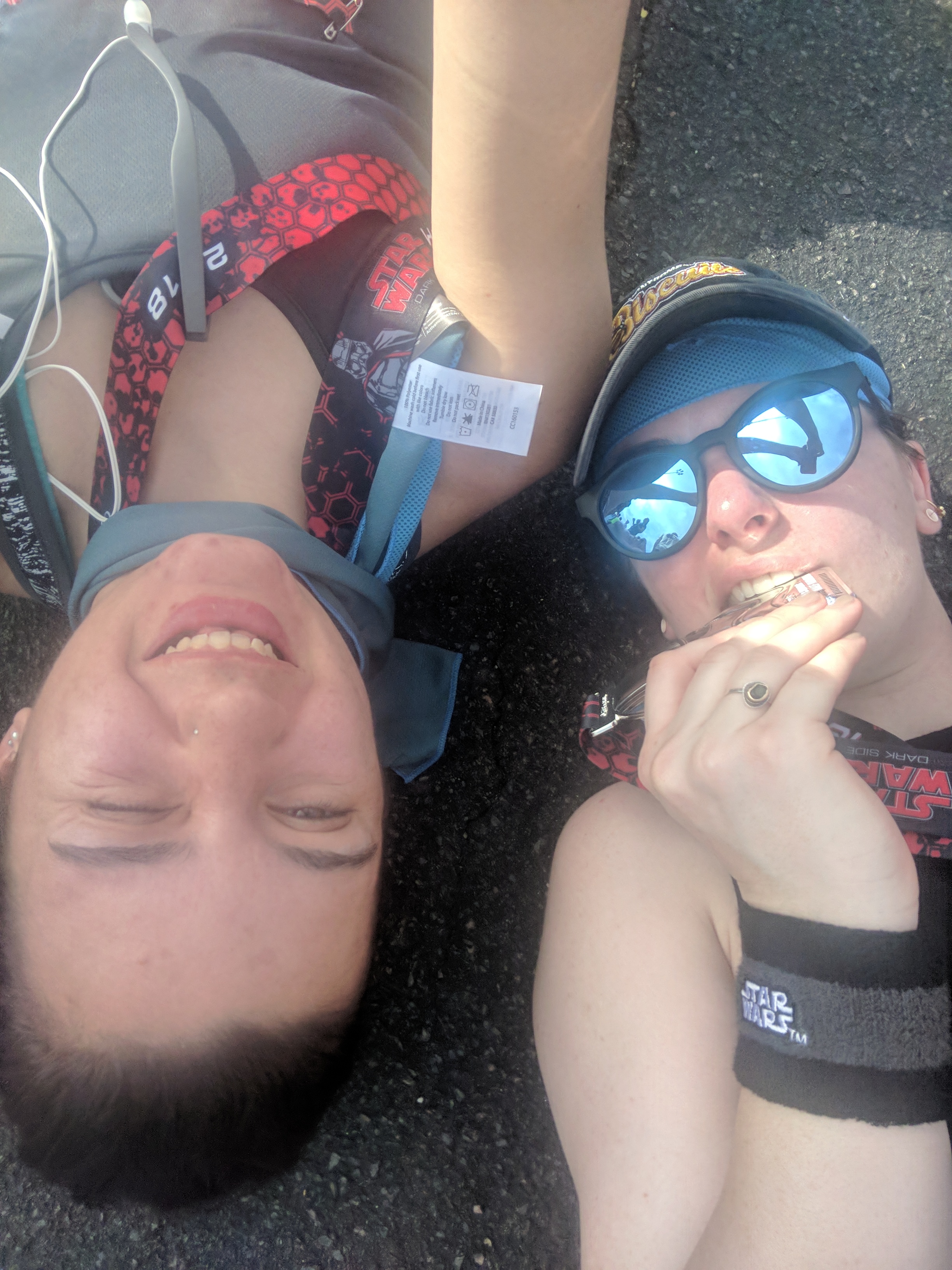 Once our breath was caught and Instagram updated, we enjoyed the remaining entertainment. WE GOT BEER and also took pictures with a thoroughly unamused Kylo Ren, much to Rebekah’s shagrin. 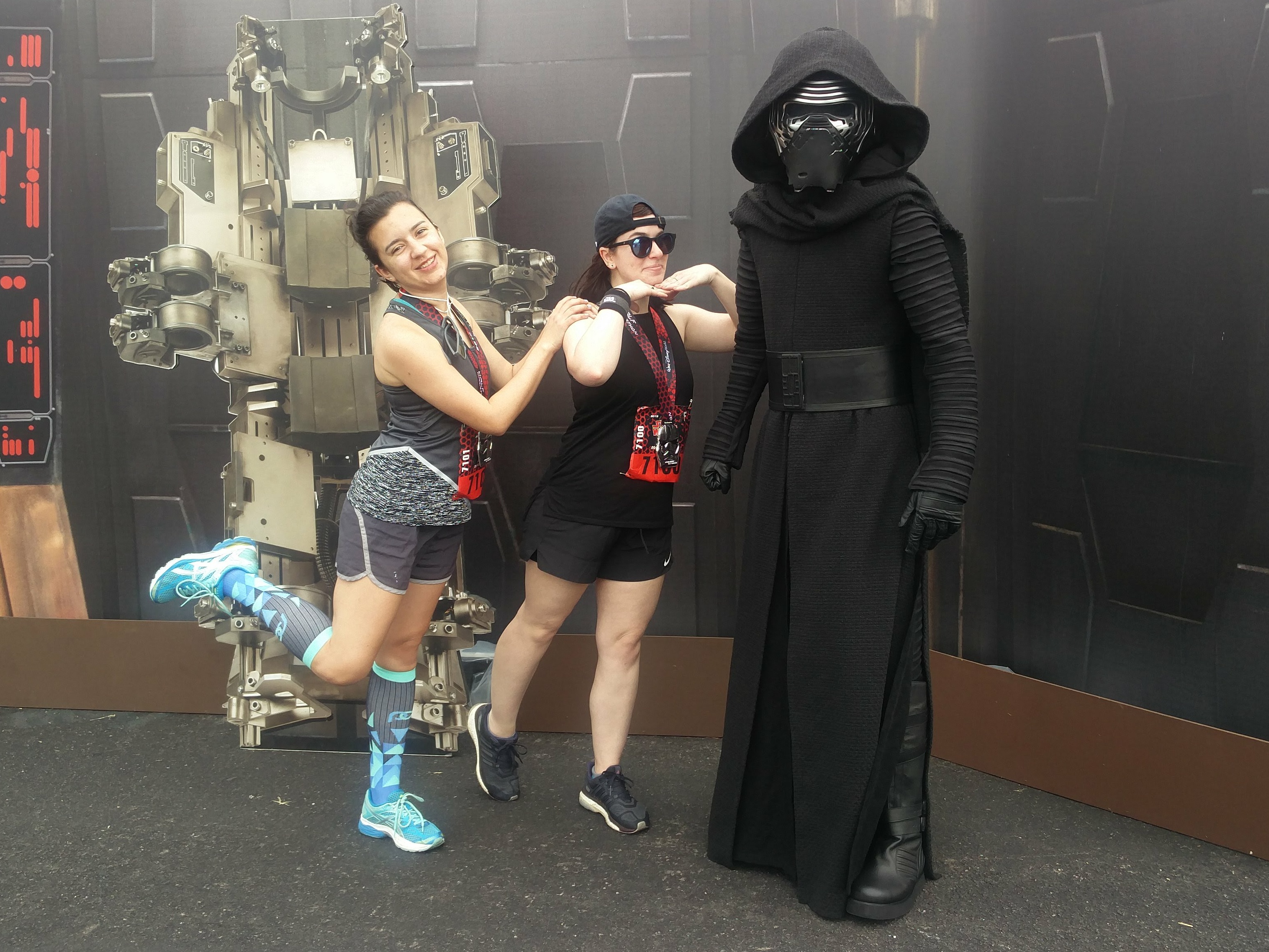 We eventually made our way out of the park. We got back to the hotel room and woke up three hours later. A hot bowl of ramen filled our bellies at a local restaurant, and we went back to sleep for another thousand hours. 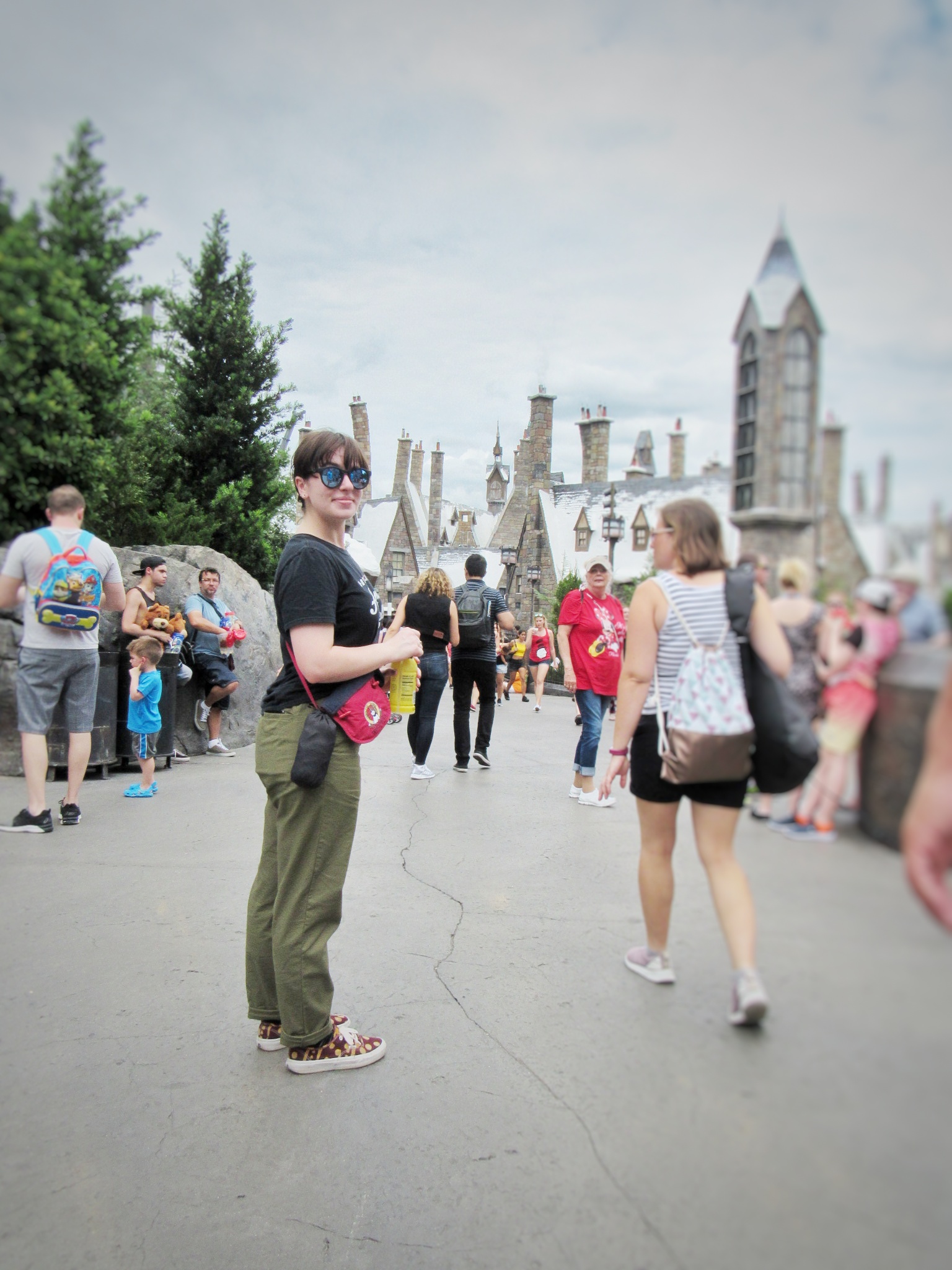 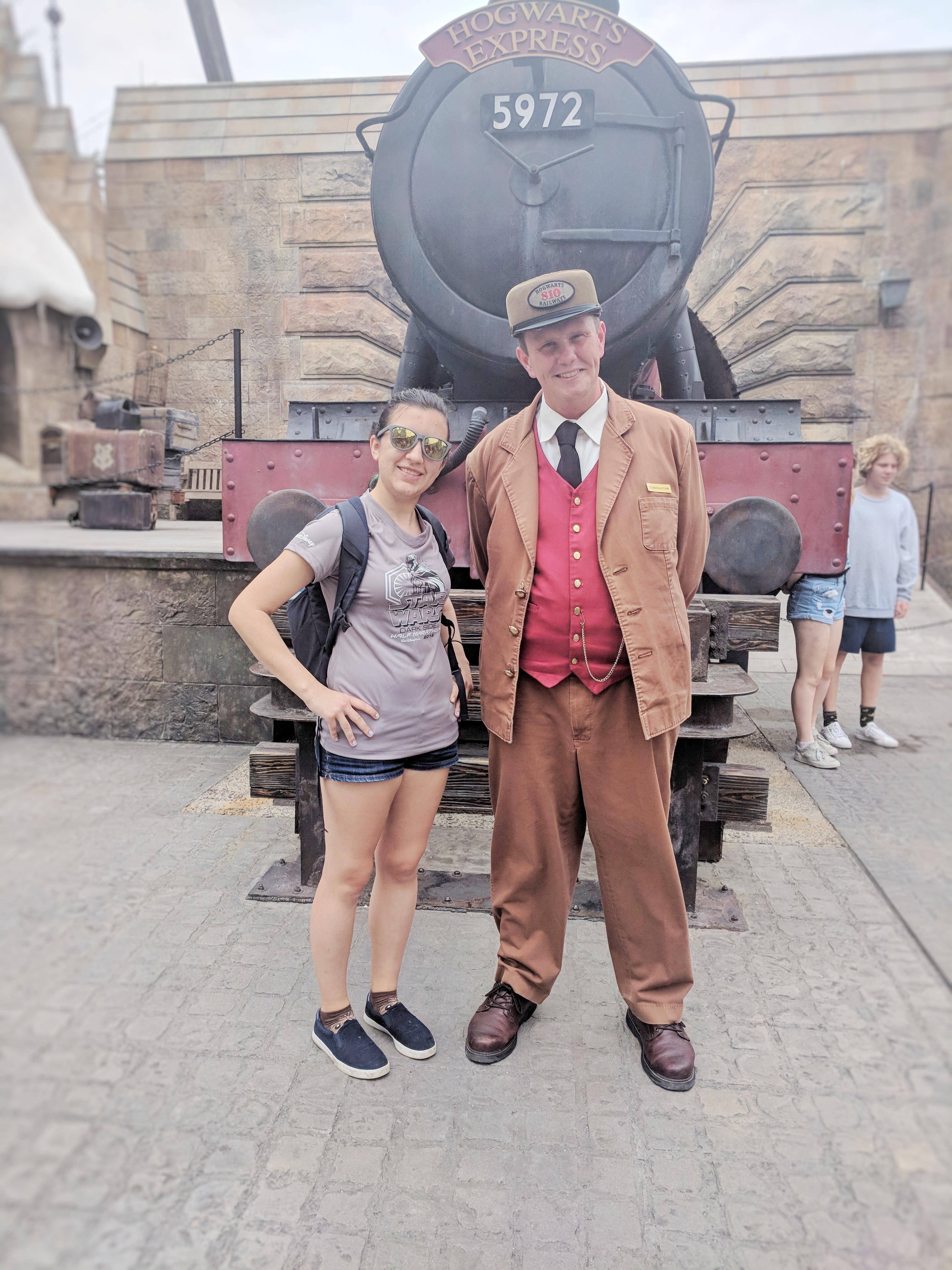 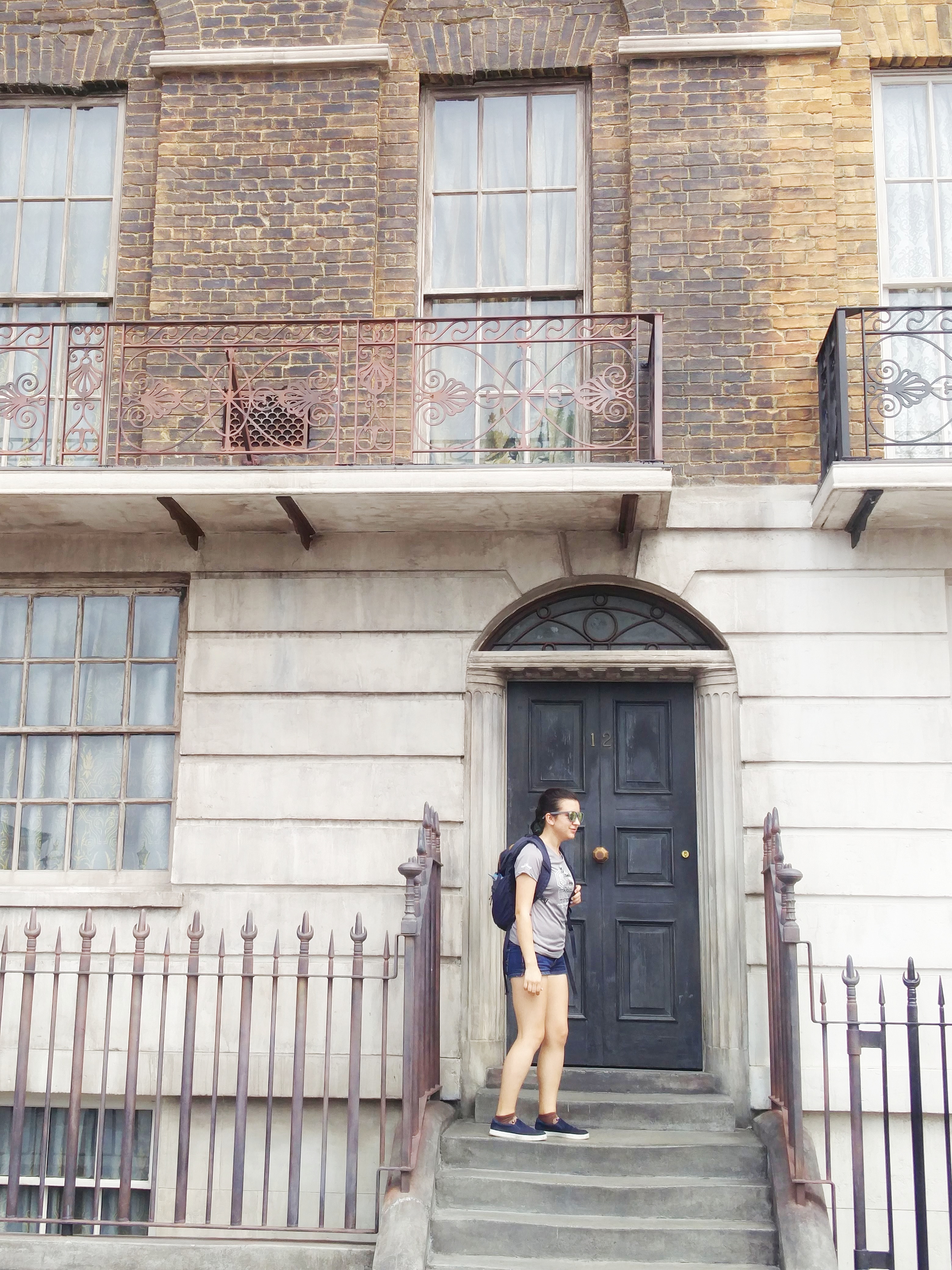 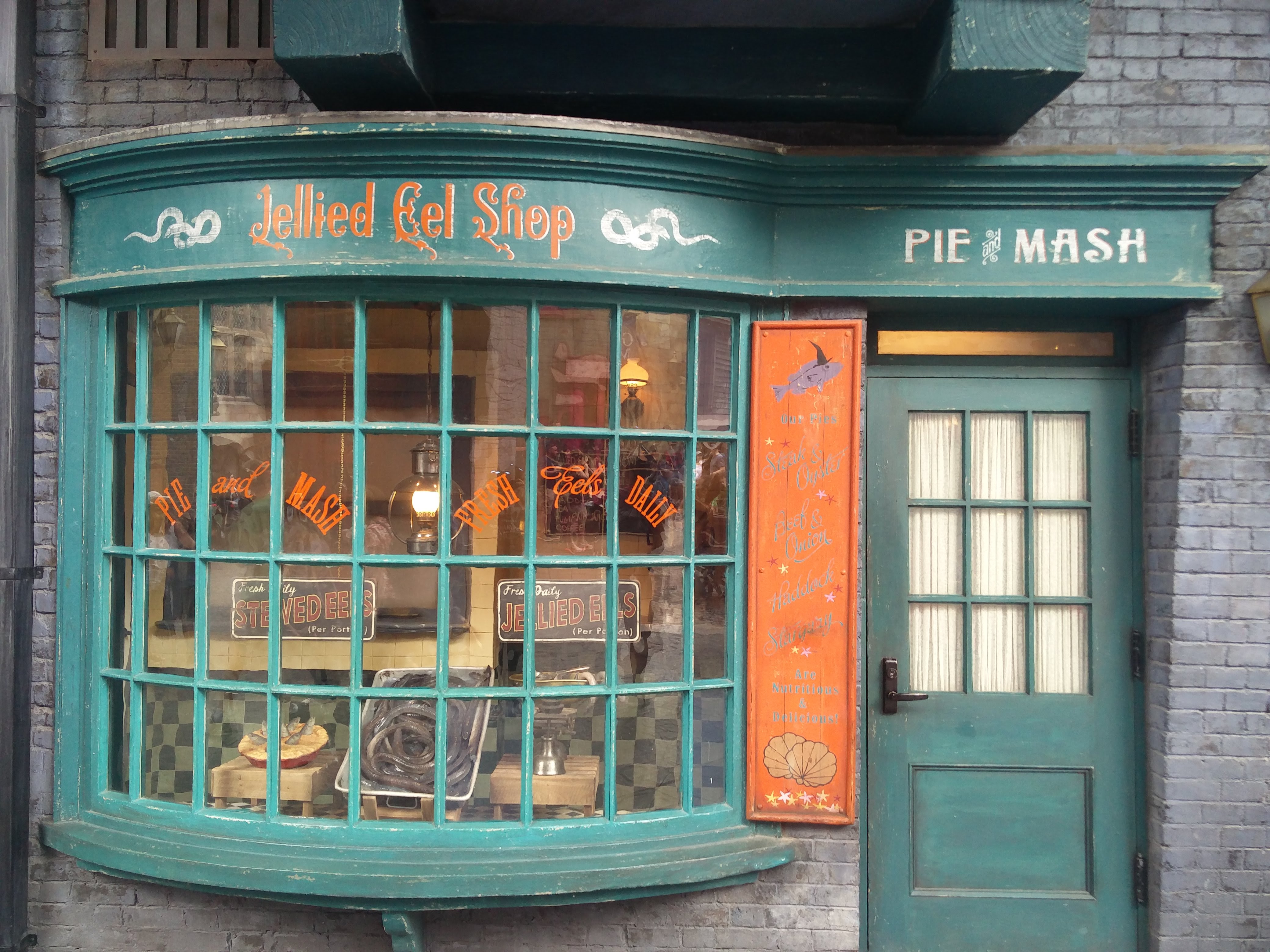 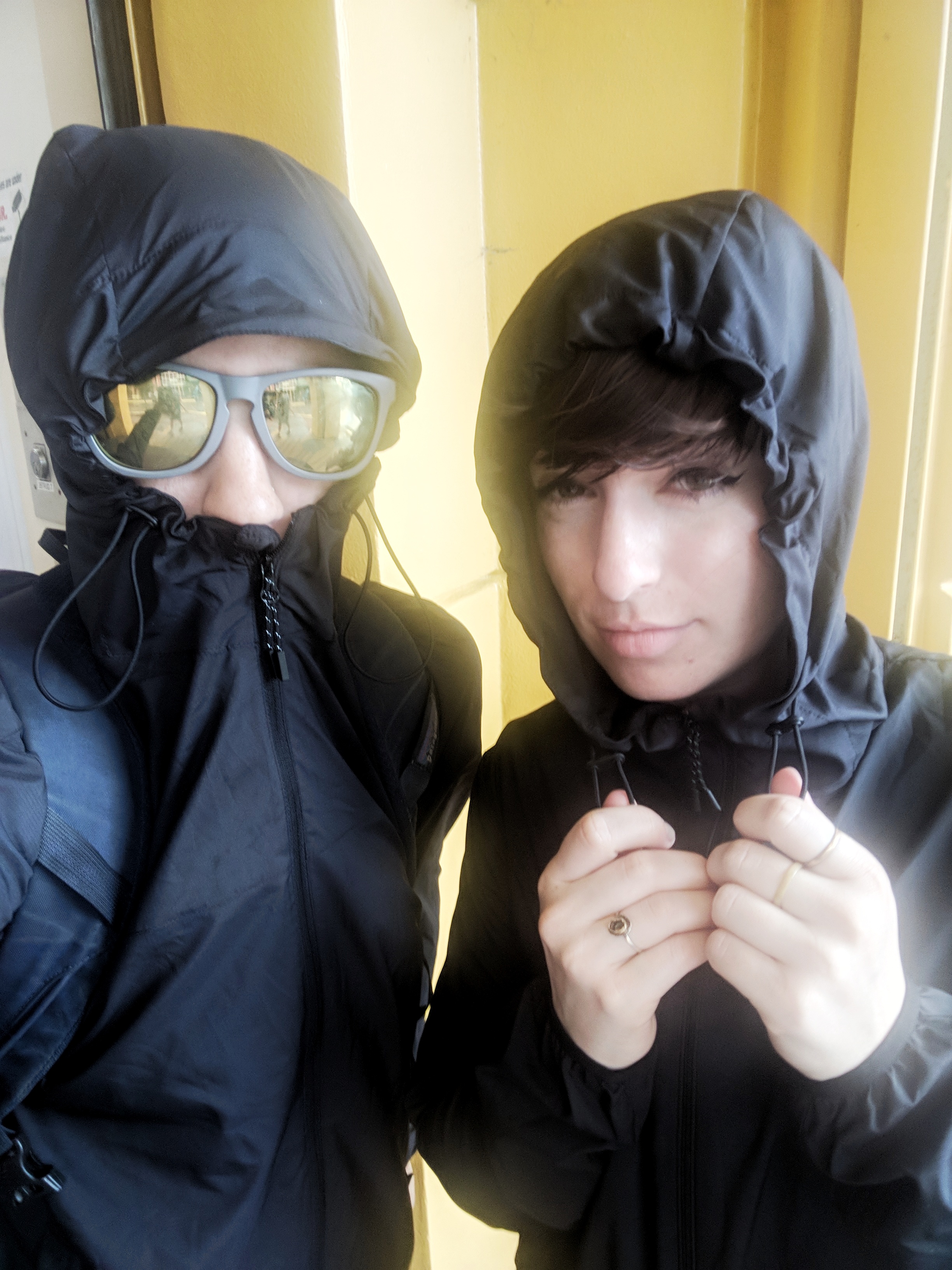 And then we flew back to Atlanta, where Andrew was waiting to drive us home. We made it back to the house at that ole familiar 2 AM.

This was quite possibly the most physically demanding thing I’ve done in my twenty-six years on this planet. Today we woke up to life being business as usual and, eventually, we will begin training for our marathon. I’M READY.

6 replies to “Half Marathon”