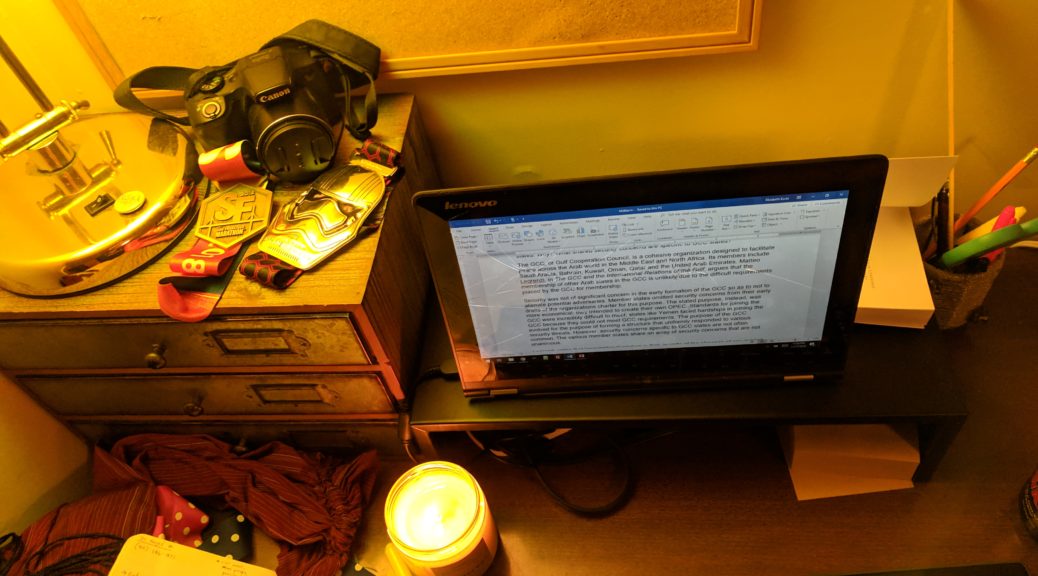 Allow me to broadcast the complex nature of my life this weekend without being accused of anything stupid. This is partially a vent (because you, internet, are my ever-listening therapist), partially a brief autobiography, and partially an exercise for me to partake in until I fall asleep.

Two important school deadlines lingered over my head as the weekend settled in. I used the majority of my non-work time this week to make headway on my Master’s capstone project; the first draft, for which, is due this Sunday. Of lesser importance was the midterm requiring a few short essays to selected prompts.

Knowing I had a twelve-hour work day on Saturday but was not scheduled for Sunday, I reserved the latter to complete the midterm as I knocked out the majority of my capstone work between shifts throughout the week.

It was Friday afternoon, about an hour before I was scheduled for an evening shift, that I caught my grave error: the midterm, which had exactly zero words written for it, was not due on Sunday. It was due to my professor’s inbox by midnight on Saturday.

It quickly became clear to me that there was simply no chance of getting all three thousand words on Middle Eastern Sercurity to him in time, considering the twelve hours of work Saturday demanded of me. I wrote him an embarrassing email explaining the mistake and asked what my options were. As I waited for his response, I began typing in the final minutes before work to contribute anything I possibly could to the assignment.

Thirty minutes before work and after I realized the mistake, mid-sentence on a statement about Oman, I was on my bedroom floor texting Rebekah to take me to the hospital. My back had seized in an uncharacteristic, dramatic fashion that rendered me incapable of moving. The pain subsided in several minutes and I was able to bring myself down the stairs and explain my broken situation to the roommates.

Two ibuprofen pills and a phone call to Mom later, and I decided to head to work instead of the hospital. In the most likely scenario, the outcome of a hospital visit would be a muscle relaxant, which is not something anyone with a deadline needs. The worst that could happen would be that I collapsed at work, and honestly? There are worse things.

Mom advised Tiger Balm and naproxen sodium, to which I obliged, and I headed to the restaurant.

The professor did not email me back during my miserable shift and I went to sleep loopy from the pain and the medicine. The next morning required a 5:30 AM wake up to make it to the next job, an eight-hour shift at the coffee shop. I checked any and every felt or imagined buzz from my phone in anticipation of an email from my professor.

The medicine and unending hours on my feet took everything out of me and I lost the several hours between shifts as I succombed to sweet, sweet slumber. I was back at the restaurant this evening and poured margaritas to all of Montgomery, awaiting an email to vibrate its presence in my back pocket. My three thousand-word midterm was only two hundred words, and it was 8 PM.

I was home by 8:30, ate dinner, and confronted my reality. If no extension was given, I’d fail the class and would not receive my Master’s degree in four weeks. I concluded to type my fingers off and get something, anything, submitted by the deadline. The pain meds had worn off and my back was no longer yelling at me.

At 11:55 PM, the email finally came through. My sorry explanation for the mistake did not warrant the extension, but an email from a work supervisor outlining my busy schedule might. It wasn’t the work schedule that was the problem, however, and I don’t feel comfortable with that route. I responded with the completed midterm, just shy of three thousand words, attached to my repeated apologies.

You see, I was made fun of a while back after I expressed discontent with being accused of lazy because I’m a millennial. Throughout the past day and a half I’ve had an army of people cheering me on, asking how they could help, or personally delivering a care package, in one case. All millennials. All people who have been there, who know what it means to chose between going to the hospital or going to work, who have made stupid mistakes and tried to honorably correct them.

My midterm was, if I’m being generous, shit. But it’s completed, and I made it to work(s), and my back hasn’t given out on me again. And tomorrow I’ll finish the draft of my capstone and hold my breath as I double check the due date. And my incredible support army will be marching in solitary because we all know what it’s like to face it all at once.

I’m not unique, and there’s nothing about this burden of responsibilities that makes be special. The empathy radiating from Montgomery, Alabama, has never made me feel so included.

One reply to “Solidarity”