Disclaimer: I did not sneak into the Stanley Cup playoffs. My life isn’t THAT cool.

Last spring I spent my final spring break as an undergrad in Chicago with my twin brother, Ben Kurtz (my poor mother had the misfortune of being in labor for 17 months). At the time, he was a student at Michigan Tech, located in the upper peninsula of Michigan, and I was a student at SUNY Potsdam, located in Upstate New York.

Since neither of us could spend the money or cared to fly home, we decided to meet in the middle of MT and Potsdam. Our options were to drive at a horizontal line and meet in the middle (Nomansland, Canada), or head at a diagonal line South and stay within the confines of our own country. One 13-hour train ride later, I was in Chicago.

After a half a day of travels for both of us, we met late in the evening at the tallest building in America. If he wasn’t my brother, I’d say it was romantic. We were exhausted, broke, and excited to see each other. Ben literally had less than $50 in his bank account. But whatever; if there’s one thing I’ve learned since moving out at 19, it’s that money doesn’t have a whole lot to do with adventure potential.

Ben, avid sports fan that he is, informed me that there was an NHL game going on that night. We had no other plans, had no idea where we were in relation to anything, and we had no money to get into the game. It had already started anyway, and we figured by the time we got there it would be over. As only two Kurtz’s in the same time zone would do, we found ourselves a Starbucks, used the WiFi to look up directions to the Blackhawks arena, and began our trek. We had no idea how the public transportation system worked yet (and, in all honesty, we probably wouldn’t have been able to afford it anyway), so we were on foot.

Three miles later, we found ourselves at the United Center, enjoying the buzz of people hovering around for the exciting game antics. 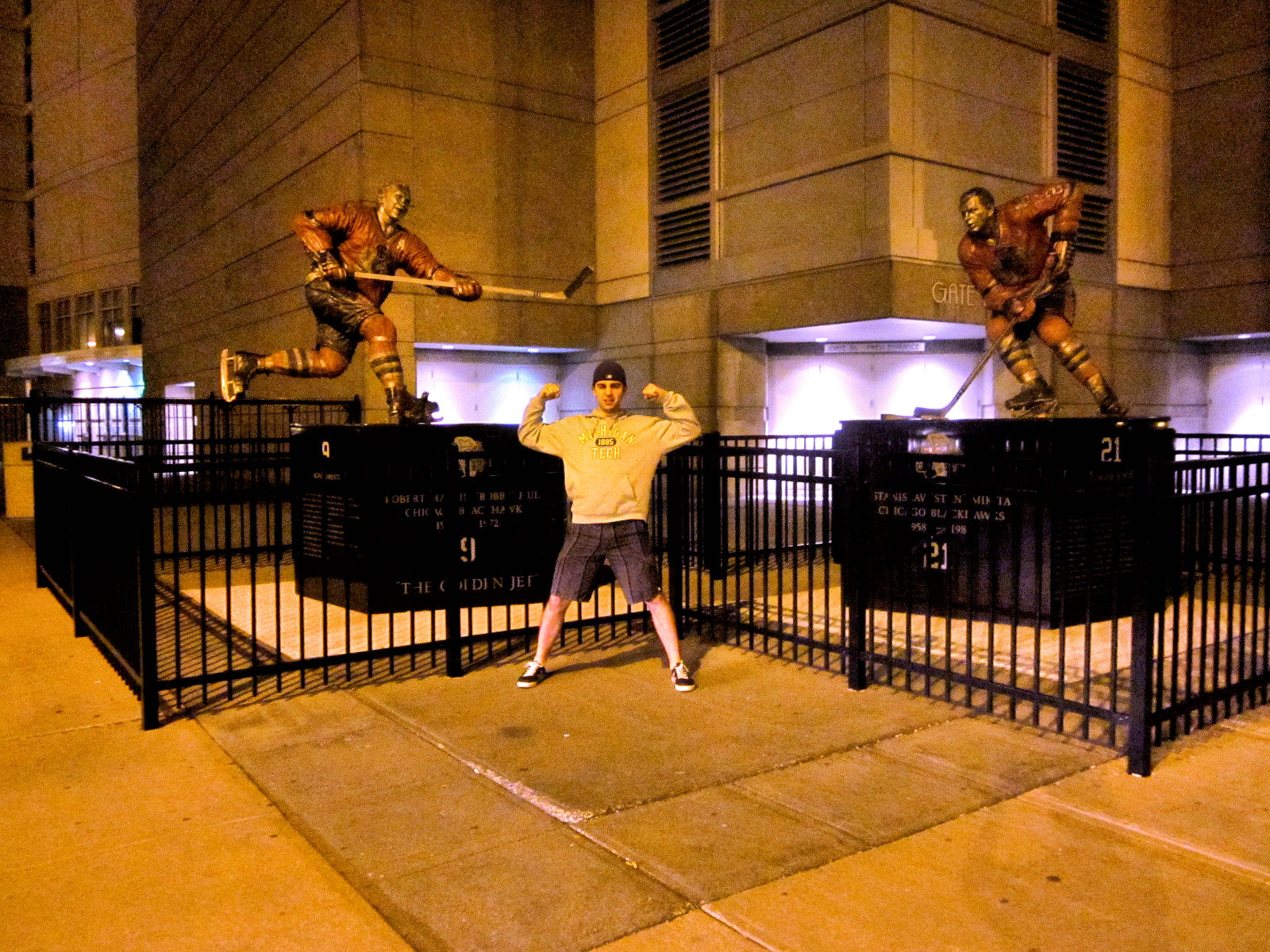 Ben, outside of the United Arena

This was all we really wanted or expected: to get to see all the people. There were a good number of people mulling about outside of the arena, so we figured the game was over. We tried our luck with security to see if they’d let us in, since the game was over, so we could just be part of the exciting hockey crowd and live vicariously in their post-game glow. We were broke; it would have been good enough for us.

I’m sorry, I can’t let you in without a ticket, she said. There is still one period left in the game.

One period left! How could that be? We walked three miles after the game had already started, and there was still a period left in the game! We boldly asked if we could be allowed in to watch the final period.

The security guard could tell we were just a couple of young kids who wanted to see a professional hockey game together.

I’m sorry, you need to have a ticket to get in, she said. But see those two guys walking out right now? They look like they’re leaving. Go ask for their tickets.

She didn’t have to tell us twice.

We approached the two departing Blackhawks fans and explained our situation. We didn’t have to plead for too long before they surrendered their tickets to us so we could get in to see the final period.

We returned to the same security agent with whom we were bartering, and she let us in.

AND THE GAME WAS AMAZING.

We had unbelievable seats!

The game not only went into overtime, but it went into a shootout as well!

And the Chicago Blackhawks won!

Have I emphasized how awesome it was yet? 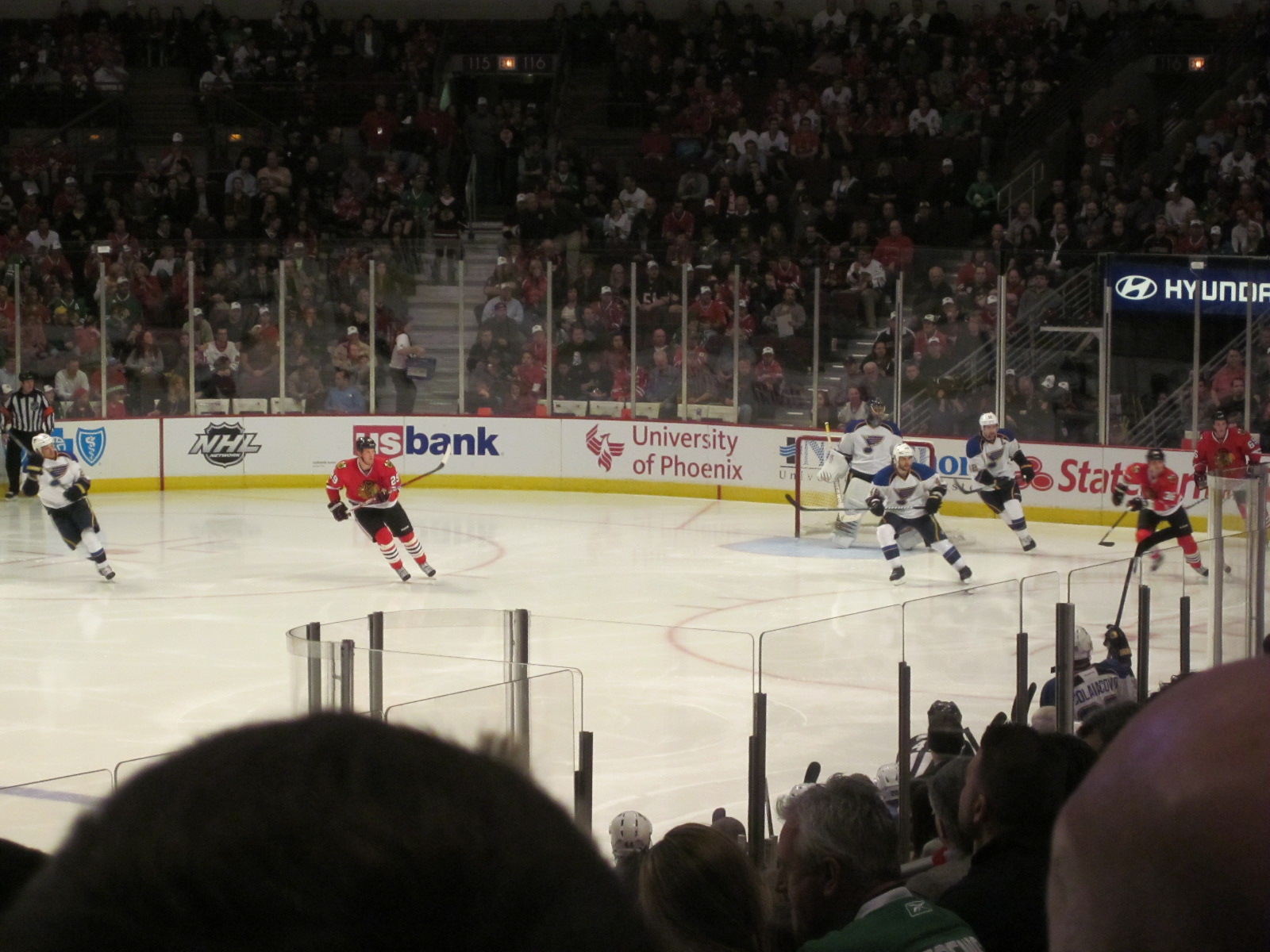 Our view. And we didn’t even pay for it. 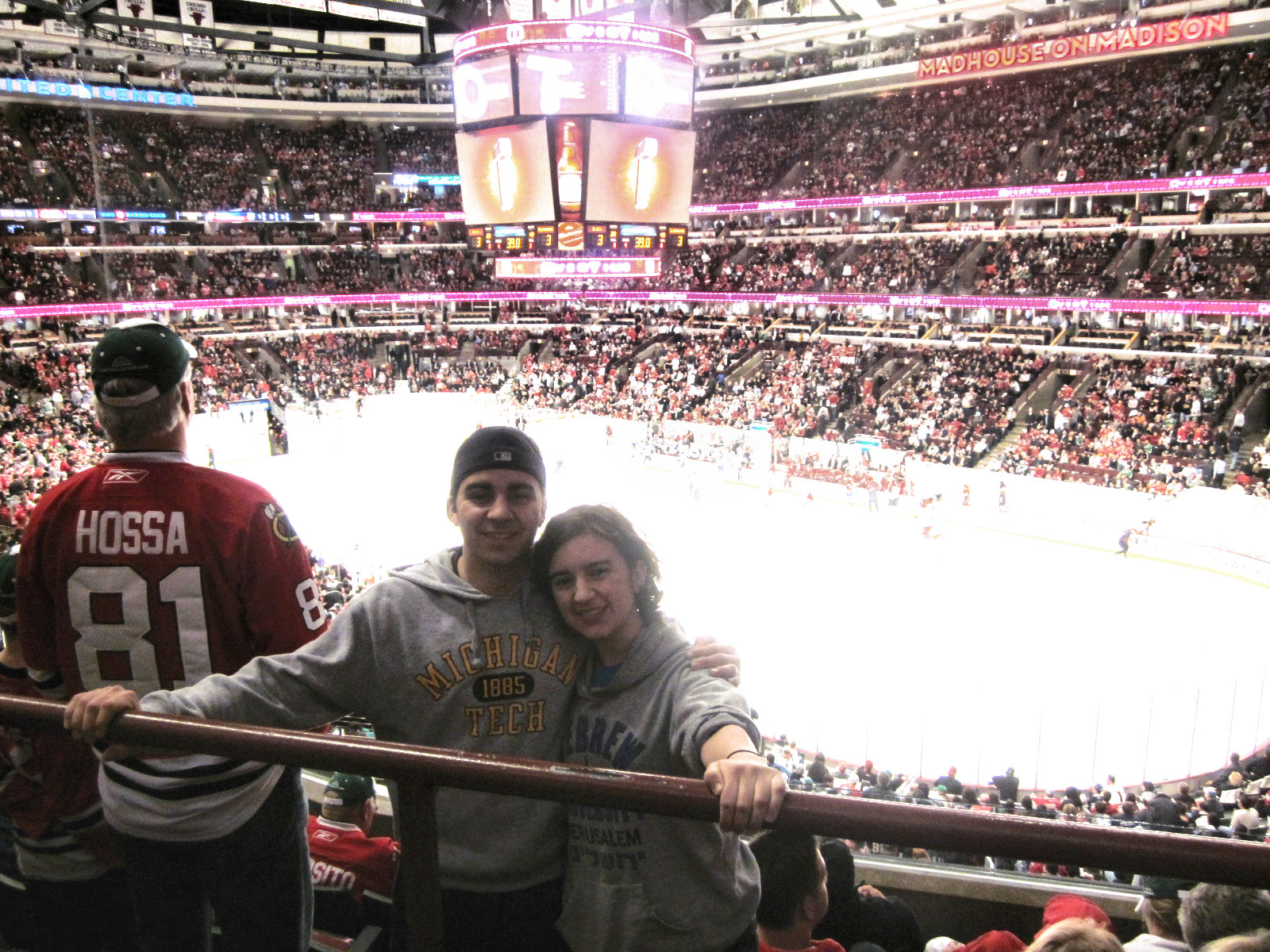 Not a bad way to spend your spring break.

Although he wasn’t a Blackhawks fan, and I hadn’t even so much as heard of the team before that night, Ben decided that I needed a memento to remember the incredible night we had. He spent half of the money he had on a Blackhawks T-shirt for me.

If you had a crush on a hockey player, he said, It would be this guy. Patrick Kane. And he’s a Blackhawk.

That night, a hockey fan was born. No, a Blackhawks fan was born. I want to shake the hands of the two men and the security guard who helped Ben and I sneak in. They have no idea how precious of a memory it created for me.

One year later, I haven’t paid attention much to the hockey season, but still religiously wear my Blackhawks shirt.

Several rather important teams in my circle of important people made it to the playoffs this year.

Round 1 bore witness to the confrontation of the two teams that have created a schism in Kurtz family alliances: the Anaheim Ducks and the Detroit Red Wings. I religiously watched the 7 games between the two and mourned with my oldest brother but celebrated with Ben when the Wings finally defeated the Ducks in the 7th game.

Immediately after the Wings’ victory, I received a text from Ben: Wings play Chicago in Round 2. I typically cheer for whatever team Ben tells me to cheer for, but this time I responded: I regret to inform you that I may have to cheer for Chicago during Round 2.

And thus, another Kurtz family schism was created. The Wings fought the Hawks tooth and nail all the way through Game 7, when the Hawks finally put an end to it with the final victory. Hawks were going to the Stanley Cup. 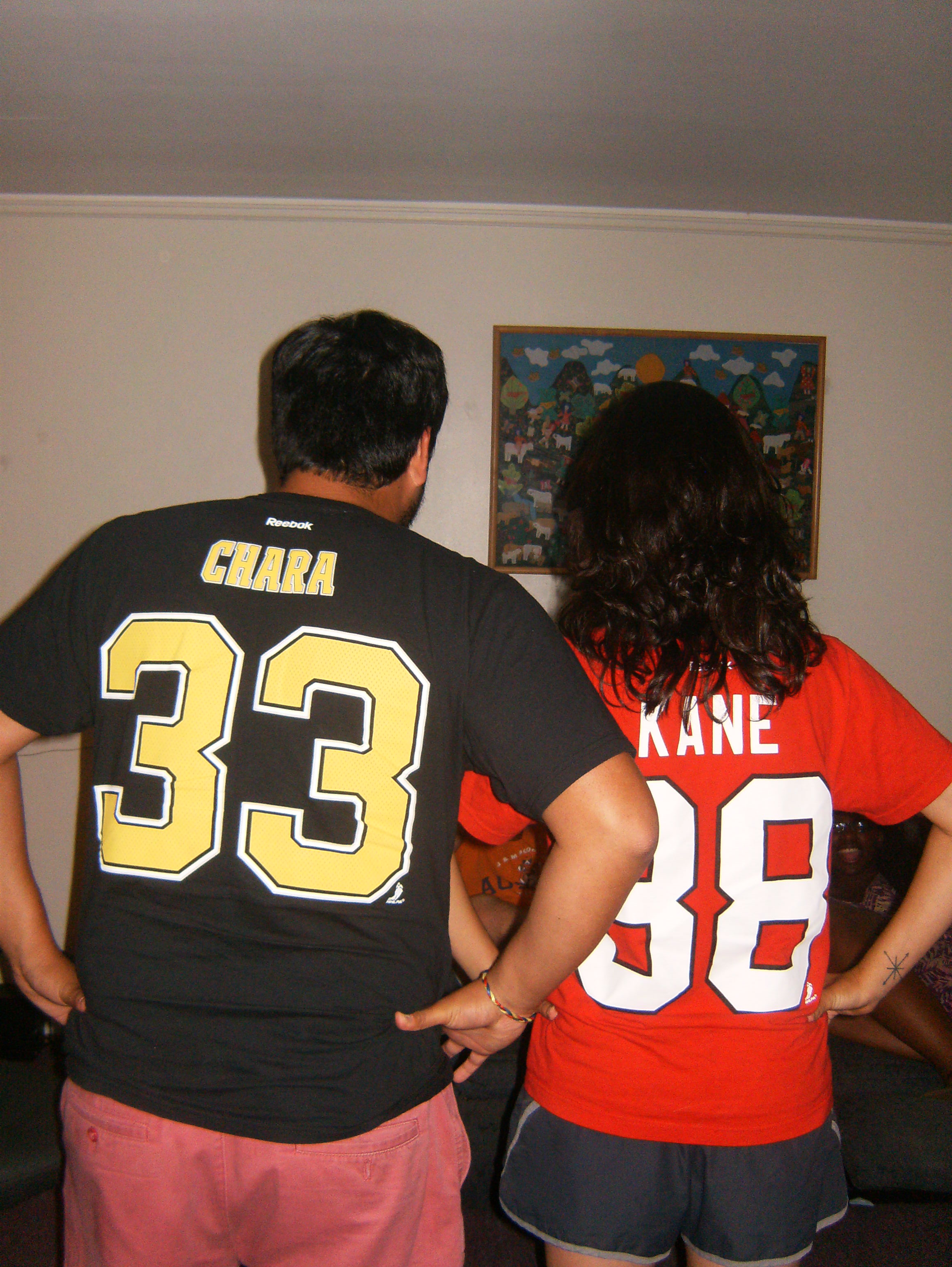 But wait, there’s more! Amongst my small circle of friends here, there is only one other hockey fan who had been paying attention to the playoffs. He, too, is a Yankee. A Yankee from Boston. A Yankee who has been a Boston Bruins fan his whole life. A Yankee who would be cheering for the team that was set to battle Chicago for the coveted, 32-pound Stanley Cup.

For the past two weeks, Andrew and I have been watching the games together. Him in his Bruins jersey, me in Kane’s.

I was unable to watch the 6th game in this well-matched faceoff last night, but received the updates from my dad (I like him, he’s a Hawks fan) and my oldest brother (I dislike him, he’s a Bruins fan) throughout the night.

The Hawks won their 4th and final victory over the Bruins last night, and took home the Stanley Cup.

And who won the Conn Smyth trophy, an award given to the player who was the most valuable to his team throughout the playoffs?

None other than my boyfriend, Patrick Kane.

Last week I found a prime opportunity for me after my term with AmeriCorps at a school that offers a grad school program for free to AmeriCorps alumni. It’s location? Two hours from Chicago.

My dad’s response? Don’t move there unless you can afford tickets to the hockey games.

You never know where your adventures might take you. At least, I don’t.

Just over a year ago, I had no idea I’d fall in love with Chicago, the Blackhawks, or Patrick Kane. I had no idea I’d get accepted into AmeriCorps and move to Montgomery, only to find out that decision would provide me with a shot at a free ride to grad school in none other than the great state of Illinois, just two hours from Chicago.

We are at the beginnings of the next adventure in the life of Lizy.

To read the original story of my spring break, which includes the other fun things that happened while Ben and I were in Chicago (and sports an ancient RPS layout!), click here and scroll to the March 19th and March 15th posts.