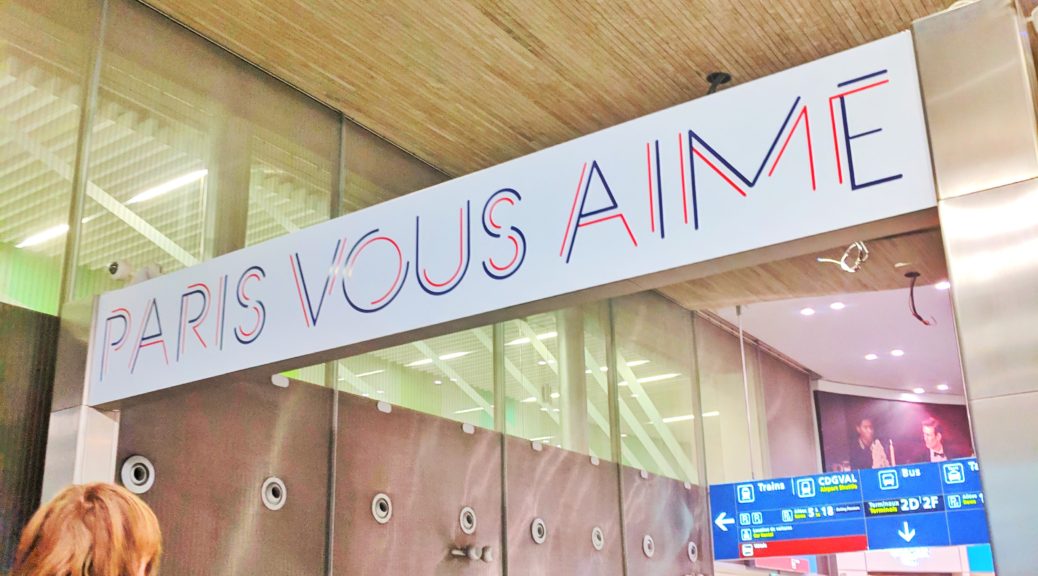 I just discovered the café I’ve been squatting at has an outlet in the wall behind me, which means I now have even more incentive to keep on squatting. My second cappuccino just arrived at the table and my crepe is long since finished. I arrived in Paris a couple of hours ago and I have yet another couple of hours until my Airbnb host is available to let me into the apartment that I’ll call my own for the next month. So, it’s squatting at a tourist trap of a café with my luggage until the keys of my new home are released to me. 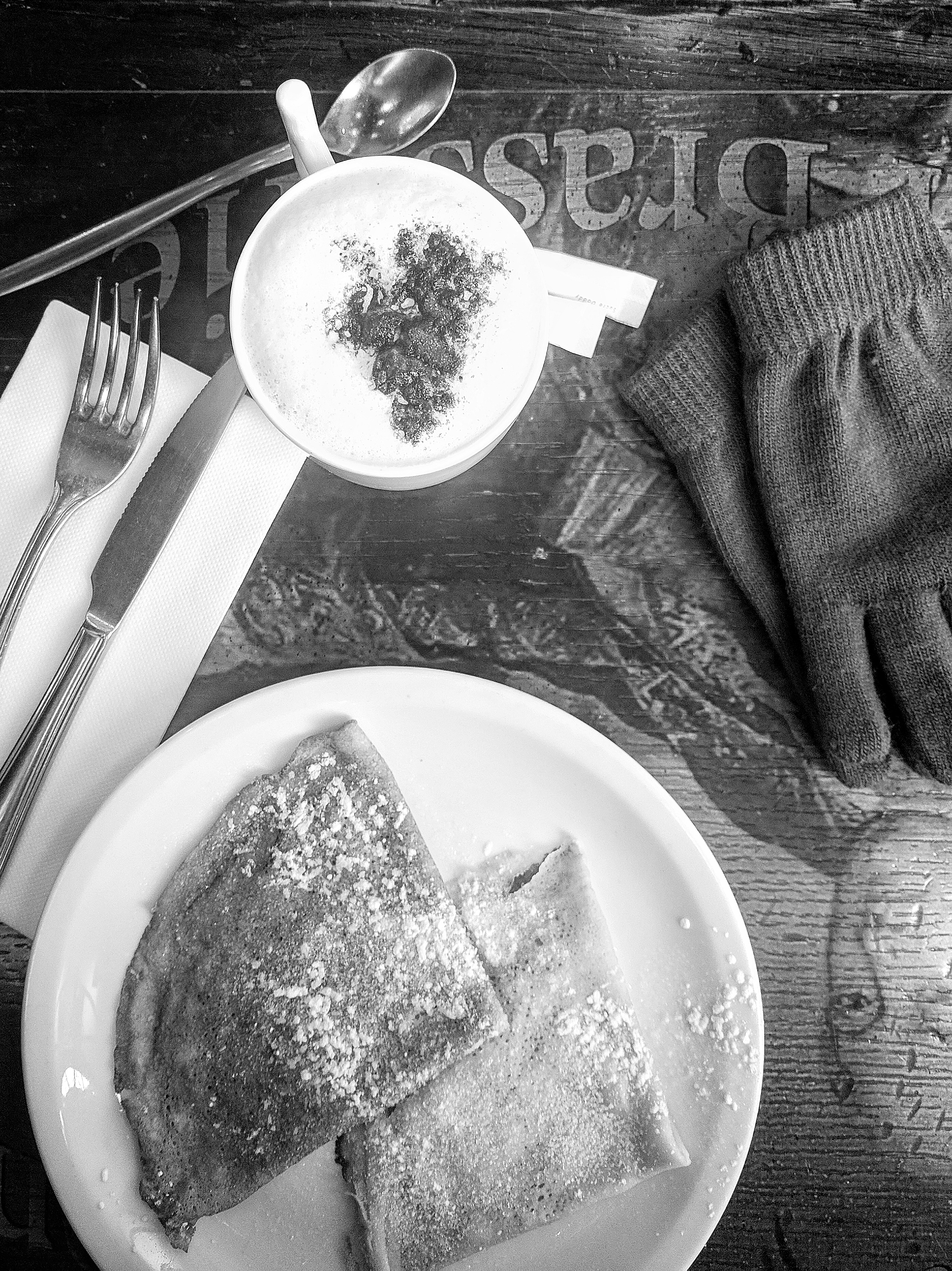 It’s a perfect opportunity to record my raw, unfiltered experience before it escapes me. One of my goals for this trip is to record something about it every day – be it a photo on Instagram, a blog, or a quick comment about what I’m up to on the Book of Faces. It is always so tragic when a trip goes from “I can delay on recording this, it’ll be in my memory for a long time” to “shoot, what’s this picture from again?” I’d like to prevent such forgetfulness this time.

The trip officially started when I left Glendora this morning at 8:00 AM. Madre and Padre drove me the forty-five minutes to LAX for an arrival that was a comfortable three hours ahead of departure. A slight hiccup regarding my check-in didn’t harm my itinerary; I had my ticket in hand and was through security in record time. My flight left at noon.

The flight was uneventful and so I’ll save you those details. Nice rowmate, everything was cramped, I watched a few movies, blah blah blah. The only thing of interest was that I’m 90% sure I’ve had one of the flight attendants before. I’ve always passively wondered if I’d ever have a flight attendant twice.

Although my trip officially began that morning, the dawn of adventure really settled in after we landed. Announcements over intercoms were suddenly delivered in French first and English second. Everyone in the airport – even those from my own plane – was defaulting to French. One woman on my airport shuttle was an otherwise normal looking mom herding a family around, discussing details of their travel plans to see a wedding. What made her extraordinary was the no less than three “oh la las” she unironically tucked into the conversation. 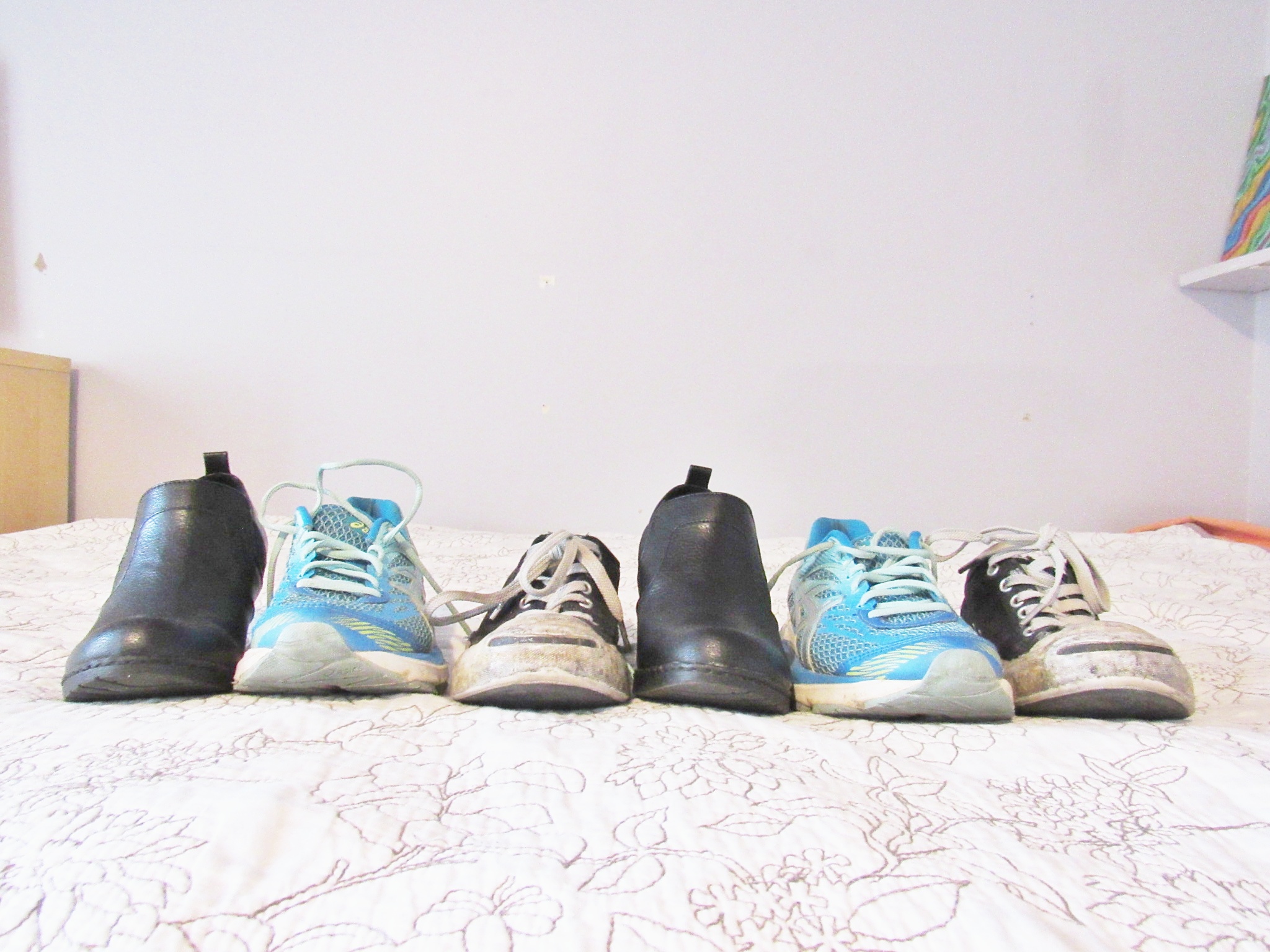 The three pairs of shoes getting me through this trip.

Navigating the airport was easy enough, which is fortunate considering I had no plan and was completely unfamiliar with where I was. The only two times I’ve tramped through CDG previously was on my way to and from Mali, each time with a whole gaggle of fellow Peace Corps Volunteers. My only goals upon arrival were to get through customs and figure out how to get to the heart of the city, where I knew I needed to entertain myself until I could access the apartment. I knew I’d get there by train, and yesterday I learned there’s a train stop in the airport. Other than that: I was plan-less.

I had a minor internal freak out twenty seconds before handing my passport over to the Passport Checker Guy when it hit me that I never looked up if a visa was required for a trip like this. Visas aren’t things I think about. It’s a minor, fluffy detail in my spontaneous little brain and I really should think certain things through a little better. I immediately began thinking of every reaction I could possibly have to the news that a visa was necessary and imagined the shame I would bring to all of America if I was sent back at the border for not acquiring a stupid visa.

The customs officer didn’t ask me a single question and hardly looked up as he waved me through.

I planned the whole trip with one carry-on and a small personal backpack, which meant I had the luxury of bypassing the baggage claim and hauling all my precious belongings in the pack I brought with me on the plane. It was a wonderful idea to do it this way because I’m damn exhausted. I can’t imagine how my body would be holding up if I was lugging around some large piece of furniture stuffed with half my wardrobe.

Here it is! One month, one backpack. Some things are slightly hidden; the five shirts, for example, are in the packing square and all my hygiene junk is in the pink bag. Not featured are two coats and the clothes on my back. I'm ready for you, Paris. . . . . #paris #tombihn #packinglight #minimalistpacking #minimalisttravel #travel #explore #allthethings #runningabroad #timetorun

It took me some time to get oriented in the airport and figure out how to get to the train. My ill-practiced French was now taking the driver’s seat in my comprehension of literally the entire world around me. For all my years of French – from Madame Charles’ classroom, to Potsdam, to Mali – this was my biggest test of my handle of the language. It’s been over a decade since my first French lesson and I’ve had the opportunity to practice it in three countries, none of which are France and all of which also have a different national language upon which I could rely.

As it turns out, Paris isn’t a very good place to practice one’s French. I’ve only been here a few hours but everyone I’ve spoken to has either switched to English after a courteous “bonjour” or, in several cases, skipped the French greeting altogether and began with English. I shamefully started with English when I was initially disoriented and tired in the airport but quickly reminded myself not to be an arrogant ass and to use the local language, even if I was a little shoddy at it. Despite my attempts at interacting in the correct language, everyone has used English.

I don’t know if this café accepts credit cards and I certainly hope they do because picking up euros was yet another thing I failed to think about. My plans from here are to make my way over to my third train of the day and relocate to my apartment, where a man named Jean Pierre will greet me and introduce me to my temporary digs. I have every intention of tossing my luggage down, plopping on the bed for a snooze, and distracting myself from necessary sleep by clicking around on my phone as I watch America wake up from their own sleeps and start checking social media. Night owls have already begun reacting to my arrival post.

I probably ought to abandon my spot at this café soon, but the waiter doesn’t seem too impatient to send me on my way. I don’t know what’s polite, but I do know what’s tired and at the moment it’s my body. My brain too because I just spelled “body” with two D’s. I’m enjoying this temporary respite.