Welp. That was strange.

Perhaps after this post y’all will understand why my dating life isn’t a bit more active. It sure is vibrant, though.

It started in a Starbucks. No, not the date. The adventure.

I made my way over to the comfy chairs section so I can plug in my laptop. I greeted the stranger sitting across from me, and we both sit quietly an uneventfully for ten, maybe fifteen minutes, doing internety things on our own laptops.

The individual across from me then starts laughing. Not to himself like he’s watching the funniest cat video ever and simply can’t contain himself. He is laughing to me. He looks up and says “Are you Lizy?”

And then I made this face: 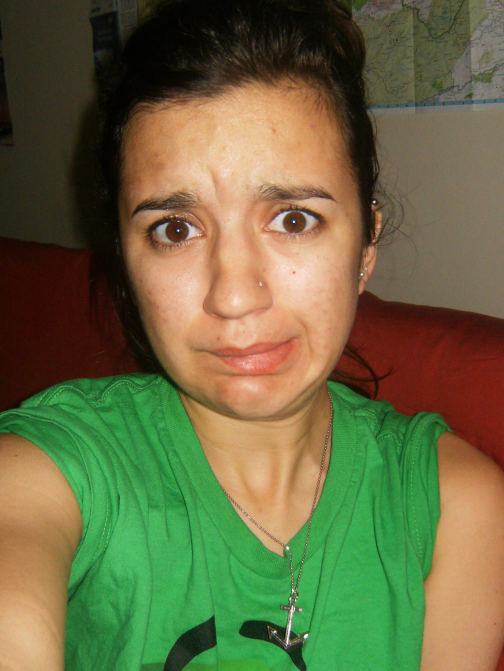 And I thought to myself this thought:

“Oh my god how does he know my name and why is he calling me “Lizy” when everyone in Montgomery calls me “Liz” and did he figure it out because he’s one of those internet hackers that can find my bank account information just by logging onto the same WiFi as me and am I about to die?”

…it’s the untrusting Los Angeles side of me.

I responded with a much more pleasant face and a much less paranoid statement. Sitting directly across from me, he was able to see the Red Pointe Shoe.com sticker on the back of my blogbook and decided to check out the site. After clicking on the site a bit, he pieced it together that I was the famous Lizy Kurtz of Red Pointe Shoe.com. Which is what made him laugh, and which is why he asked if I was Lizy.

And this isn’t even the tip of the iceberg in describing the weirdness of my adventure.

The stranger and I talk and it turns out he has a name and it is Jason. He’s into web design and computers and we talked a bit about my blog and how I really need to transition to WordPress. We then went back to our own individual internetlands.

Well, only for a short while. Jason clicked around on Red Pointe Shoe a bit more and saw that, having just moved here about two months ago, I was still in need of furniture. He and his wife had been trying to sell their futon online and had been unable to do so…so he offered it to me. For zero dollars.

VICTORY. Red Pointe Shoe just got me a futon – I knew there was a reason I was entertaining you all with my silly adventures for free!

Within minutes, I had friended him and his wife on the magical Facebook. I have a friend with an SUV and, without asking, volunteered him to swing by and pick it up within the next few days.

Now here’s where it gets exciting. Are you still paying attention?

The SUV friend I was planning to take advantage of is Joe. Joe and I had agreed several days earlier to hang out one-on-one sometime that week to get to know each other better. A date, if you will. After comparing schedules, it had appeared Friday was the only good time for Joe and I to get together for our adventure. So, naturally, Friday was also the only good time for Joe to help me transport my free futon.

And it gets better.

I was also planning on bringing pizza to Jason, Briana, and their four kids in exchange for the futon. I traded pizza for a futon.

After touching bases with Joe, he decided he was up for the adventure and had no problem eating pizza with a family he didn’t know and then helping me transport a futon across Montgomery as part of our date night.

Fast forward to Friday. Everything went well and Jason, Briana, and the kids were awesome company. The pizza was delicious and awkward moments were kept to a minimum. Jason and Joe dismantled the futon and shoved it into Joe’s SUV. I let them know if they ever needed a sitter, I’d be there any time. Then Joe and I went on our way.

After piecing the futon back together in my apartment, Joe and I decided it would be a good idea to take an intermission before continuing on with our night. We split up, changed our clothes from grubby futontastic garments to something a bit more suave, and met up again a half hour later. How many dates have you been on that had an intermission?

We went out for drinks and made a goal to get ourselves to the local jazz bar, which didn’t open until midnight and didn’t have any live music until 1:30am. …it was going to be a long night.

We thought we would be meeting up with friends at the jazz bar, so we texted Alaina and asked if she wanted to come out with us. She was down, and since she doesn’t have a car we picked her up. How many dates have you been on in which you picked up your friend to tag along the rest of the night?

We made it to the jazz bar just at midnight and were the first ones there. We hung out and sipped our all-too-heavy drinks. We people watched as the place began to fill and as the clock inched closer to the time the pianist would come out to entertain Montgomery’s classiest drunks.

The pianist summoned me up to the stage when he found out it was my first time there. “Oh, so you’re a virgin?” he said. He serenaded me with Strangers in the Night.

Each person out on the dance floor was more drunk than the last. I think our favorite was the lady that kinda tippy-toed all around the stage, kinda dancing to whatever tune she felt like and completely disregarding the music that was actually playing. She would occasionally dance with a creepy, older-looking gentleman and we enjoyed watching her sneak away from him so she could dance by herself. It appeared she was trying to avoid him all night, though they were sitting together when they weren’t on the dance floor.

When I was serenaded for a second time, the tippy toes lady was on the floor avoiding her dance partner again. She tried getting him off her by telling him to dance with me, but he only wanted her. Her second plan of action in Operation: Avoid Gentlemanfriend was to ask me to dance herself.

Naturally, I obliged. I spent the rest of the song twirling with her around the dance floor (and, yes, I was sober).

It was close to 3 in the morning when Joe decided to close his tab. While he was up, a young man approached me and asked me to dance. He was very eager and insisted that it was his birthday and that I should dance with him. I wasn’t quick enough to turn him down and the next thing you new I was on the dance floor with a drunk from the air force while my date was closing our tab.

When the song ended, Air Force Drunk thanked me for the dance and said he wanted another dance with me later. Before I had a chance to turn him down and explain I was actually out with someone else and was just on my way out the door anyway, he had disappeared. I scurried over to Joe and Alaina and the three of us made a quick escape.

How many dates have you been on that ended with a dance with the wrong guy?

Joe drove me back to my car, we bid adieu, and Alaina and I drove back to our apartments.

I put my new futon into bed mode and was asleep within minutes.

And then I woke up and sat in my futon for an hour while I typed out a blog about the adventure.

…and I wonder why I’m single.