It’s currently midnight and I am sitting in the LaGuardia airport and a man with a unicycle just walked past me. I have another 6 hours until my flight and I am covered in thousands of bug bites. How did my life get here?

I actually can’t explain the unicycle guy at all. But I do have a good story about my weekend! It involves me getting married.

I arrived in New York City at midnight on Thursday night/Friday morning. Upon arrival, my homie who was letting me crash at his place, Ian, asks if I would be down for a swim. I just had an 8-hour work day, immediately drove 2 hours to Atlanta, then flew another 3 to the city. Was he crazy?

One hour and several beers later, we were in the Hudson. No, it wasn’t anything sexual, you pervs. Ian is a good friend of mine from college. We haven’t seen each other in about a year. He was only the first of many familiar faces I saw this weekend that I miss all too much from Potsdam, New York.

We scooted back to his house and passed out by 4am. 4 hours later, we were up again and on our way out the door to grab a bite to eat before he bid me adieu.

I took a train into the city and arrived by 11am. I only had a few hours to kill before I needed to figure out how to get to Albany, and this was the only substantial amount of time I was to spend in the city, so I had to work fast.

I found a Starbucks, acquired my ventilighticedirtychaiwithtwopumpsvanilla of holiness, opened up the blog book and looked up directions to things. My goal was to see everything in 6 hours. On a budget. An even tighter budget, now that I had just dropped $6 on one latte (don’t tell my mom that I still spend that much money on lattes…).

I actually ended up blogging in Central Park.

I shimmied my way back to Port Authority just in time to catch the bus to Albany.

Upon arrival, I peed my pants. I was back with my girls! 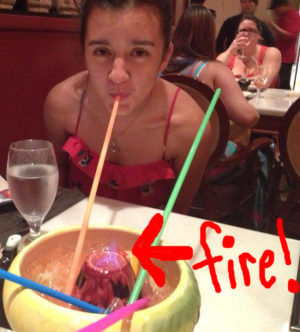 Karen, Katja, Allonah and I, aka my Rat Pack (minus one, but we’ll get to her) were reunited for the fist time since I graduated, however long ago that was. We were all meeting in Albany for the wedding of our final Rat Pack member, Alex née Kapla.

It was good to see these nut cases. I miss them.

We got sushi, shared a giant rum-filled drink that was on fire, preemptively bought munchies for when we would be drunk later, got drunk, ate the munchies, busted out the arts and crafts and made Alex née Kapla a wedding card, and fell asleep. I had the honor of sharing a bed with Allonah.

Saturday morning was spent mozying around and being extra girly. At any given time, someone could have walked in and found at least one of us in a towel, one of us getting her hair done, and one of us helping the fourth get ready. Luckily, no one walked in and saw that. That would have been weird. 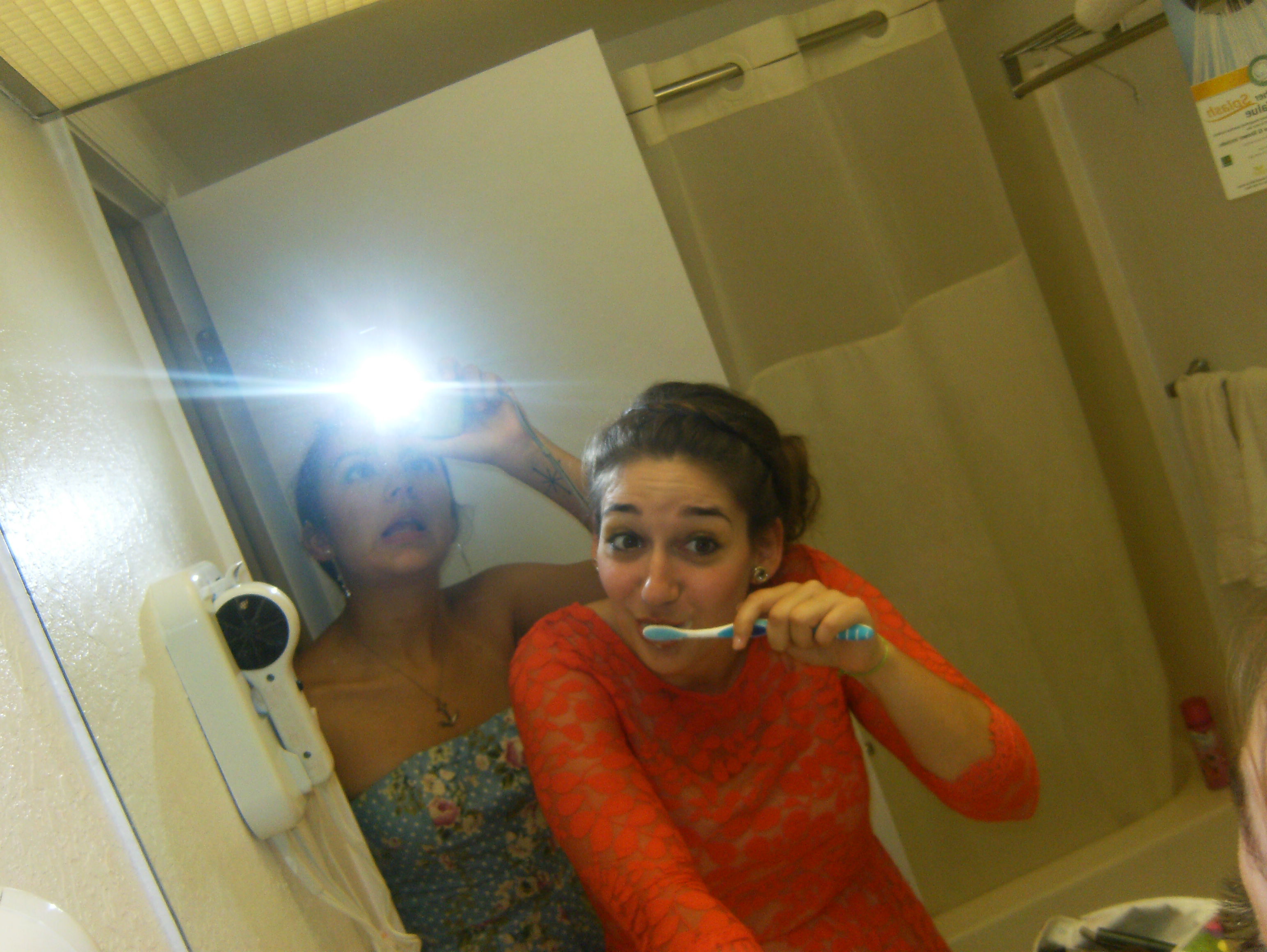 We got to the wedding, and don’t you worry: I brought my camera with me. Much to the girls’ liking. Except not really. 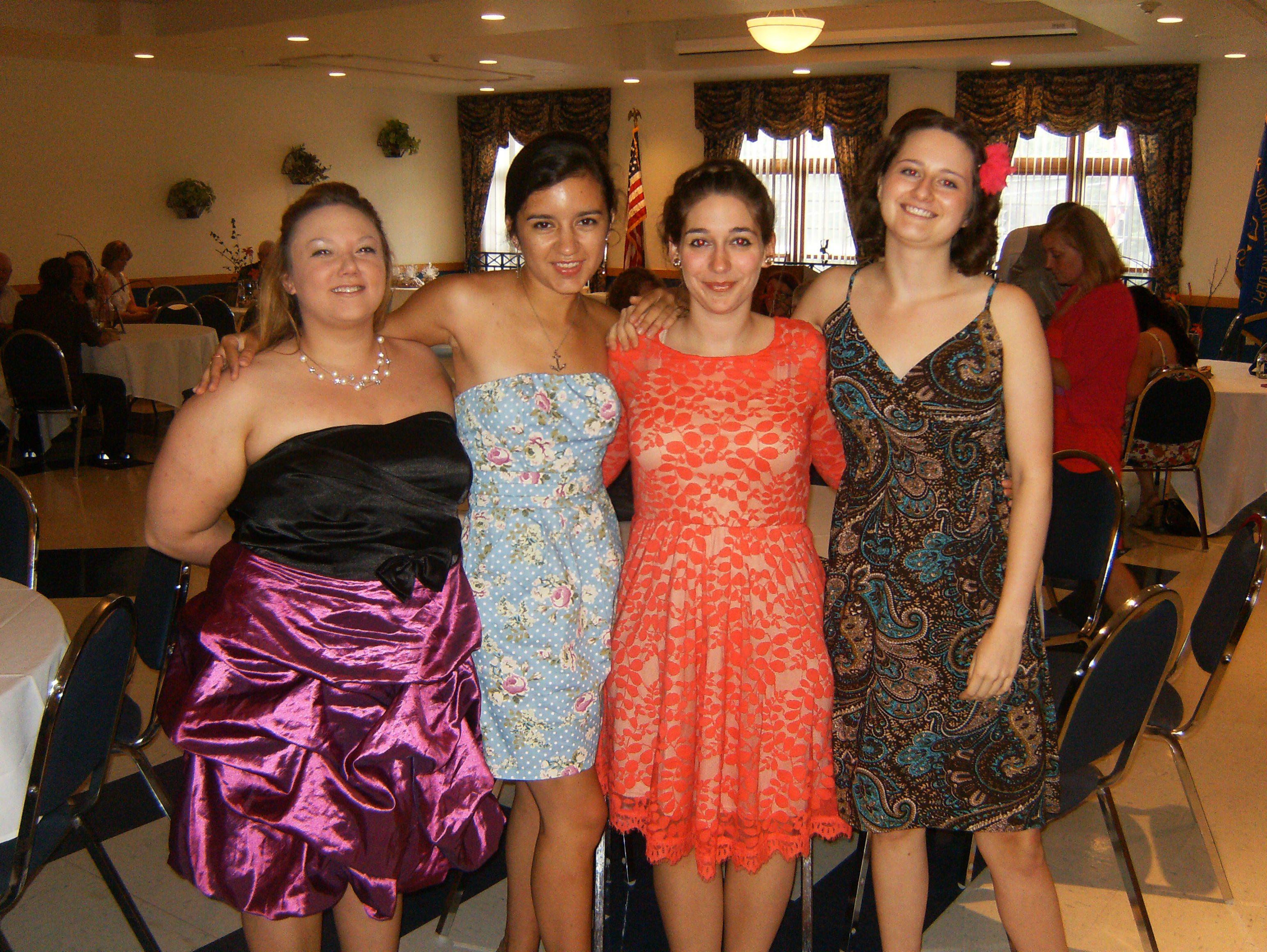 This was only the beginning of the thousands of photos I took. They hated me by the end of the night.

Alexandra née Kapla married the love of her life, Mr. Christepher Clark. It was easily the coolest wedding I’ve ever been to. It was highly contemporary, it was fun, it was unique to the bride and groom, and it wasn’t at a church. All things I want in my wedding.

When it came time for the bouquet toss, I was absolutely screwed. I usually hide from the highly-anticipated toss so I don’t have to get married ever. Because marriage is for grown-ups, and mac n’ cheese is still my favorite breakfast. I also can’t keep a relationship worth a damn. 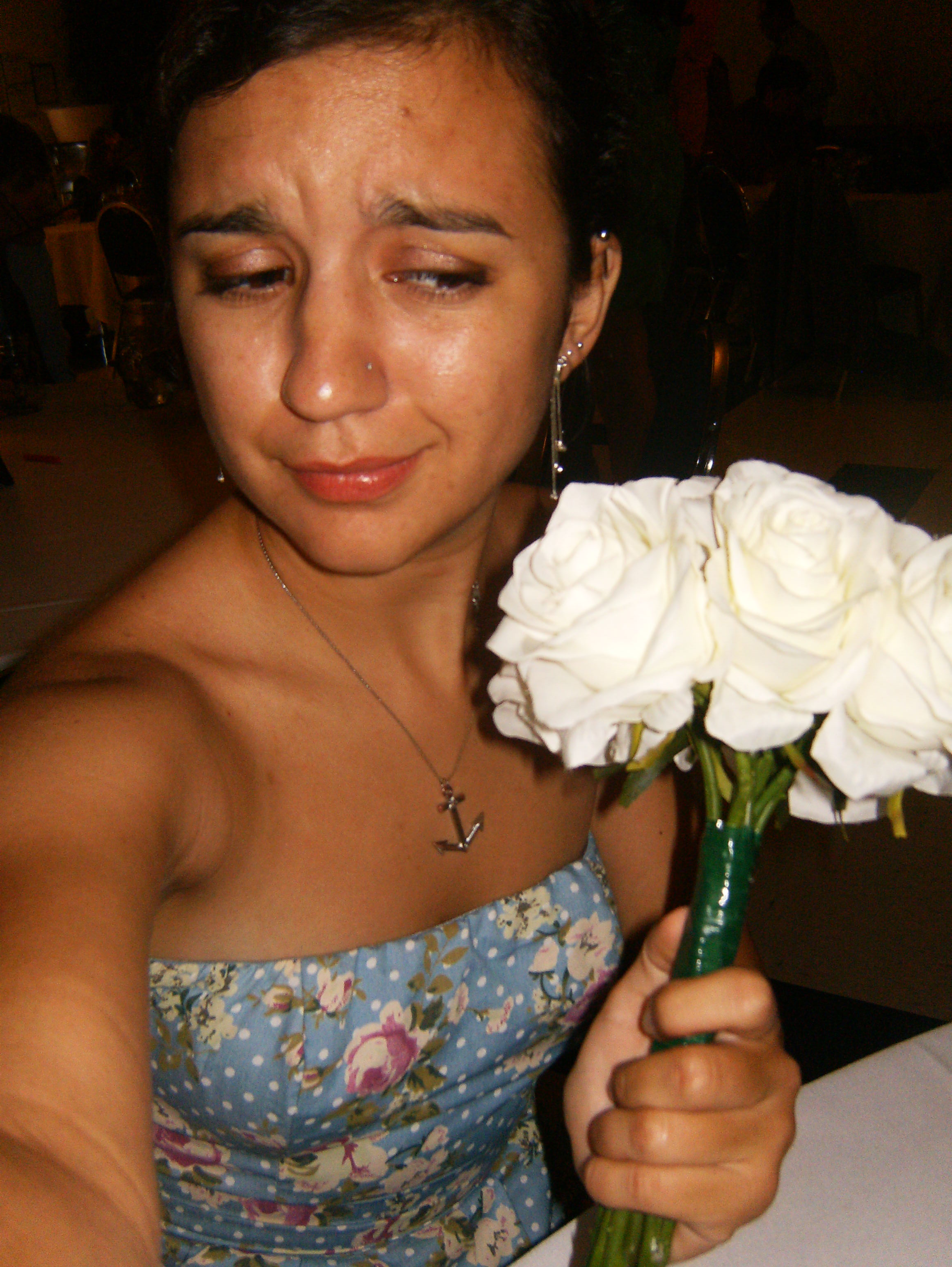 I was screwed because this time, the Rat Pack forced me to join them, and I was somehow pushed to the front. Mrs. Clark tossed the bouquet right to me.

In that split-second thought process, I actually considered letting it just hit me in the face and fall to the floor so that either a) a pile of desperate, excited, single women would fight for it, or b) she’d retoss it and I’d have time to relocate to the back.

Nope. My competitive, gut reaction was to catch it. I tried handing it off to anyone near me, but my exfriends said that the bouquet definitely belonged to me.

I’m next in line to get married.

But wait, it gets more exciting.

I had no idea that there was a tradition that whoever caught the garter was supposed to put it on the leg of the gal who was unfortunate enough to catch the bouquet.

I hope by now you’re imagining a slightly drunk version of me freaking out trying to get my friends to take the bouquet and then hearing the news that some strange man was going to put a garter on my thigh. I was in a mini dress. I’ll leave it at that.

Who caught the garter, you ask?

An 11-year-old by the name of Joshua.

All of the grown up men were quick to gather around him to explain to him what was to happen next. They gave him the option of putting it on my ankle or letting his father take care of the dirty deed (his father, for the record, was quite attractive). Nope, little Joshua was a go-getter. Here he is, handling his task like a champ: 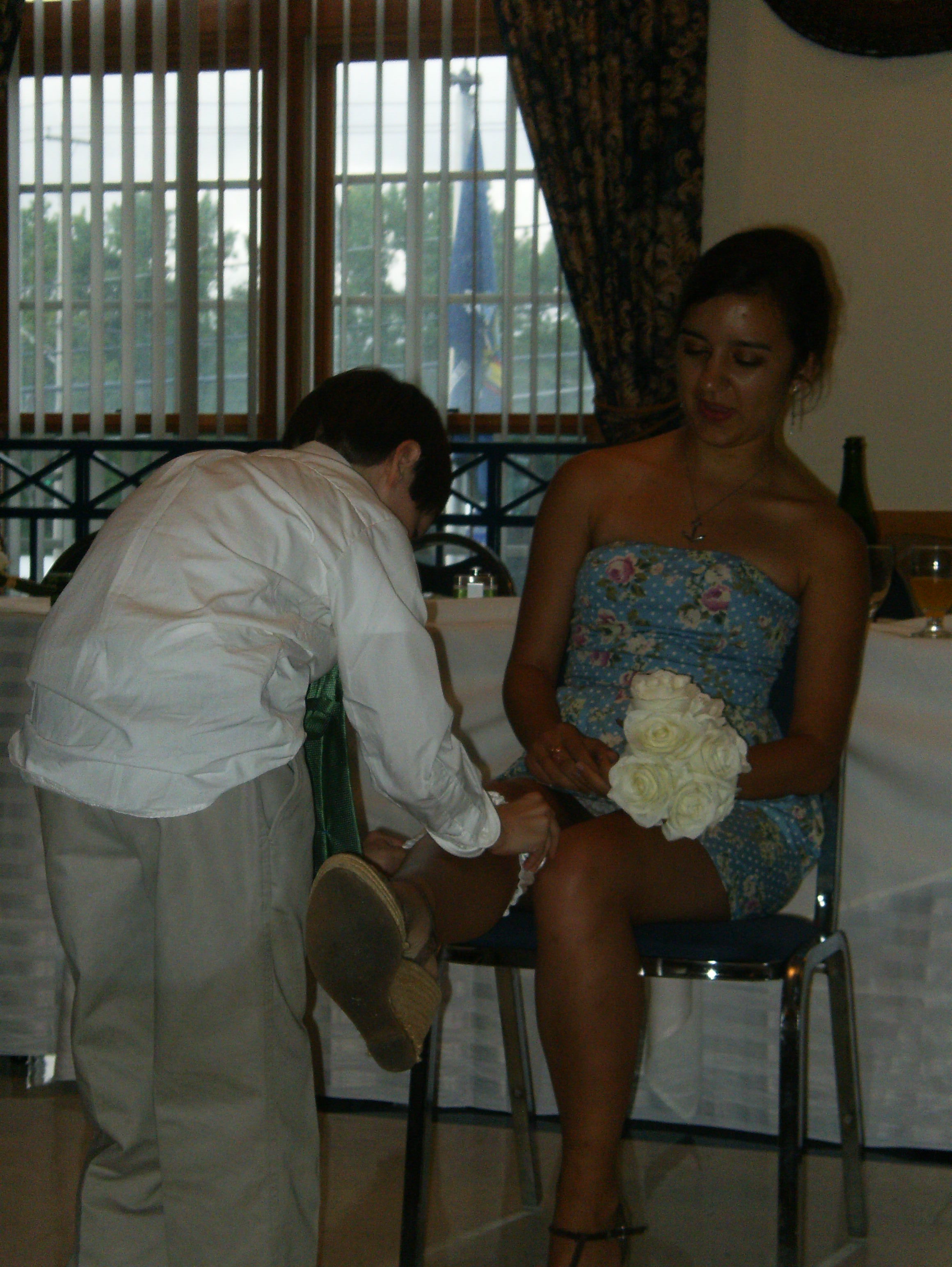 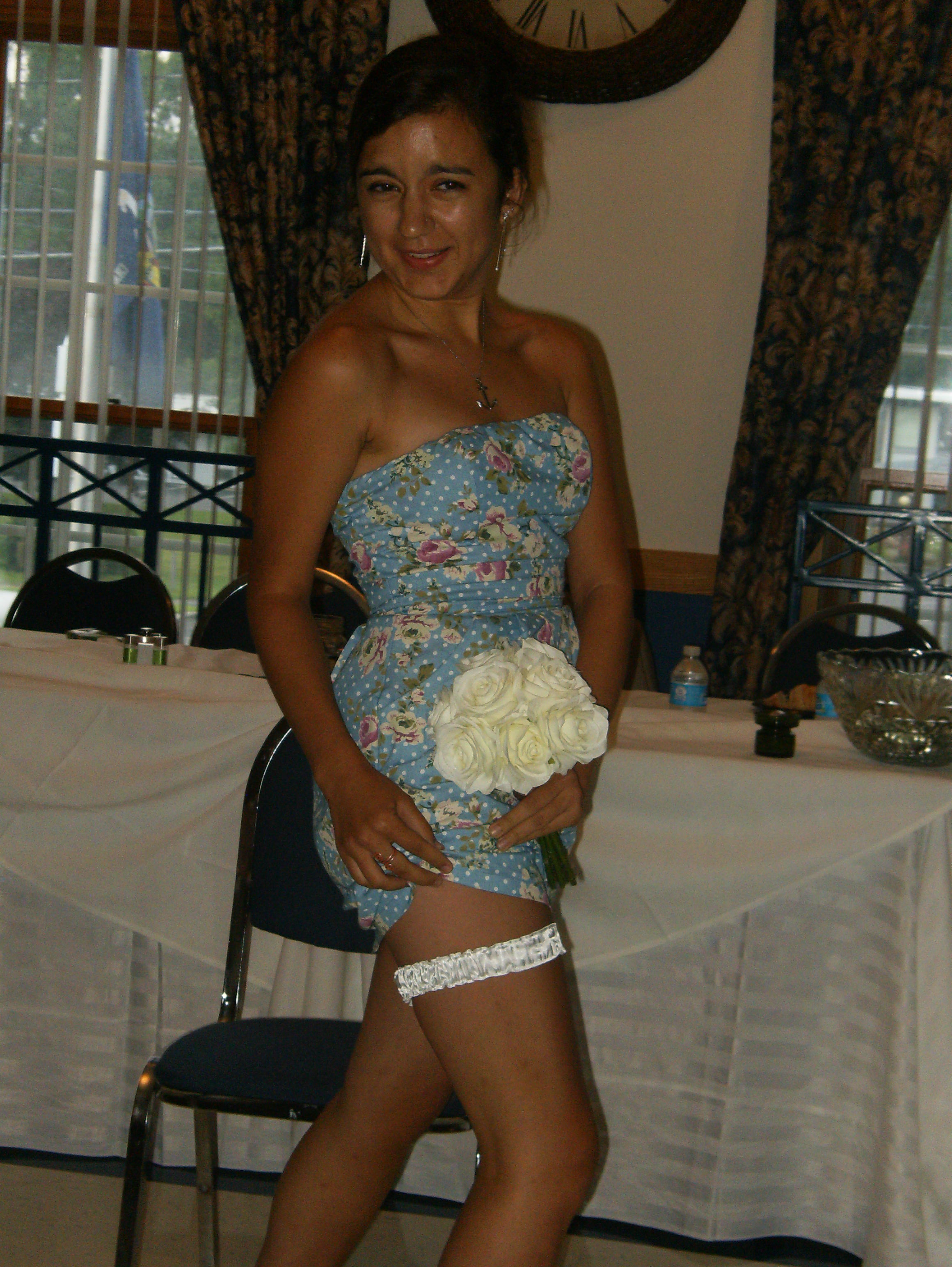 After letting him slide it up to my knee and grabbing it the rest of the way up to my thigh, we posed for some really adorable photos, and slightly drunk me had a sudden realization: what the hell was I supposed to do with the garter now?

I ran to Mrs. Clark and asked her that very question. My classy friend responded simply with: You give it back to me, I need it to hold my flask.

She didn’t have to tell me twice.

I returned the garter to its rightful owner and the night carried on.

Drinking, dancing, and celebrating my friend’s marriage with some of my closest girl friends was the best way to spend this weekend. It was a night for the memory books. And I don’t keep a memory book. So it was really a night for the blog. That’s important too, right?

We got back to our hotel room safely and passed out for the night. I bid the girls adieu in the morning, grabbed a latte, and made my way back down to the city for one last evening.

I was able to spend a moment at the Freedom Tower, which is the new building constructed on top of the site of the World Trade Center. It was moving to see the building just about completed. The first time I visited New York City, the construction had only just begun (remember how cool it was to see it, Mom?).

Realizing that the clock was ticking and I either needed to get to Ian’s for another night at his place, or figure out another plan, I subwayed back to Times Square, founded an over-crowded Starbucks, sat down on the sidewalk outside the Starbucks because I couldn’t find a place to squat inside, opened up my blog book to use the WiFi, and figured out my travel plans.

Option 1: Train to Ian’s: $10, plus Ian would have to drive me to the airport at 4:30ish AM. I would also probably pay for Ian’s coffee and some gas.

Option 2: Taxi directly to the airport: $30, drive across town by myself with a taxi driver, arrive 7 hours early.

Option 3: Subway to the bus stop, then bus to airport: $5, spend night in airport.

Option 4: Book a hostel like a normal human, then take public transportation really early: more than $60, get to airport at reasonable hour.

By the time I figured out my plan d’action, I left myself…not a lot of time. I literally caught the last bus to the airport. Had I not been able to catch it, I would have had to have called Mom for money to help me get out of that mess. Luckily I have mastered the art of flying by the seat of my pants.

The guy on the bus next to me was living in New York, was from California, and had lived in Alabama for a while. I just needed to point out that I’m not the only weirdo who rides buses from Astoria to LaGuardia in the middle of the night who has lived in those exact states.

So here I sit. I have a few more hours left before security opens up and I can mozy on over to my gate. My flight leaves at 6:30am, I arrive in Atlanta at 8:30, then drive 2 hours back to Montgomery and head directly to work until 5pm.

We’re gonna need a bigger can of Red Bull.

2 replies to “While You Were All Spazzing About Zimmerman, This is How I Spent My Weekend”