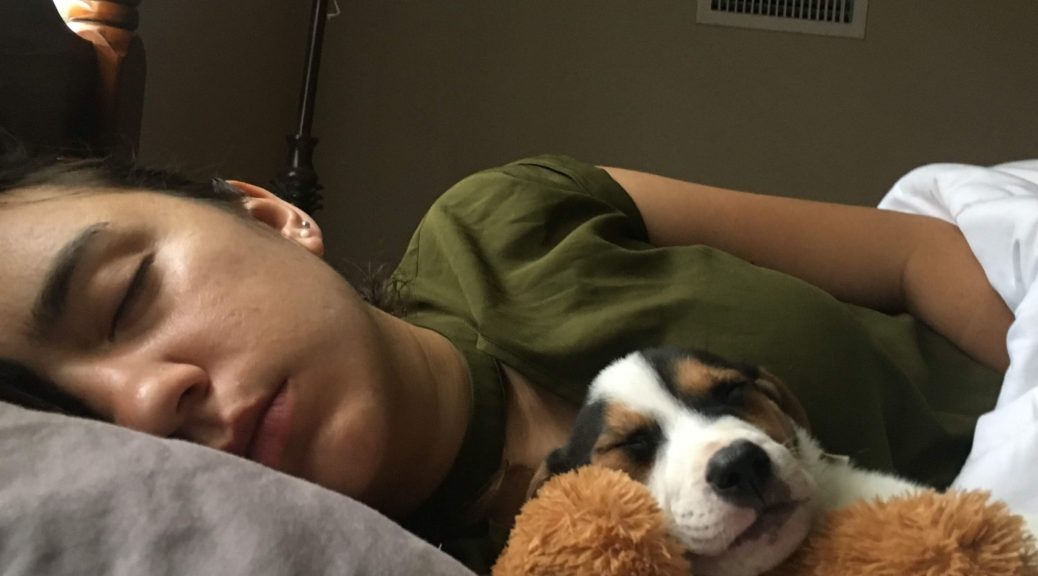 Hey, here’s a grand idea: let’s get a goddamn puppy. Because I know anything about raising a small creature and also I’m sooo responsible with a gloriously predictable life plan. Here’s to being a sucker.

I’ve always been a few years behind in the growing up process. Everything from molars to boys came after all the other toothy, sexual women got to go through the ringer. Here I am, twenty-almost-eight (at the time of the original writing), and talks about getting a pet turned serious for the first time just a few months ago. I wanted an adult female dog, and Bill and I were ready to start looking for a pair of cats. We had names and everything. And now there’s a snoozing seven-week-old male puppy next to me (and his moose is next to him) and my heart strings are in overdrive. 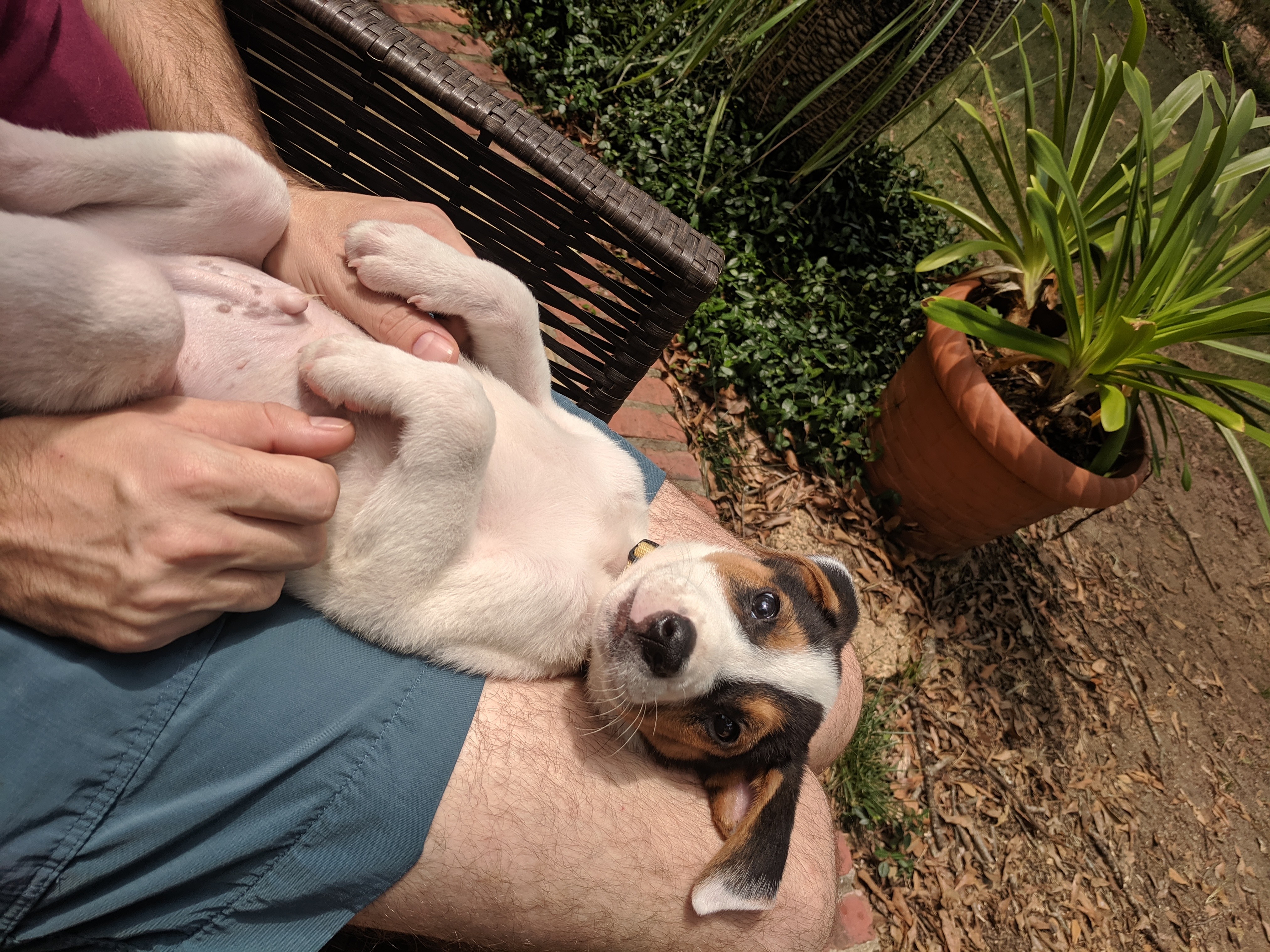 There’s certain goals that come with being human. Loving and being loved, getting a job that gives you life, yada yada yada. Some people envision kids and houses, but those people are crazy and can’t be trusted. Why would anyone want kids? And is ever making enough to buy a house a tangible reality? Ha…ha…cry.

Getting a dog was always on the list, but I was never ready. And then this short, sharp, snapping turtle of a puppy entered my life and now my time and energy revolves entirely around his pooping needs. Can’t stay at work too long, gotta poop the dog. Can’t sleep too long, Jed’s gotta take another dump. Damn, he just sighed in his sleep and you really need to see how majestic he is because pictures just don’t do his greatness justice. 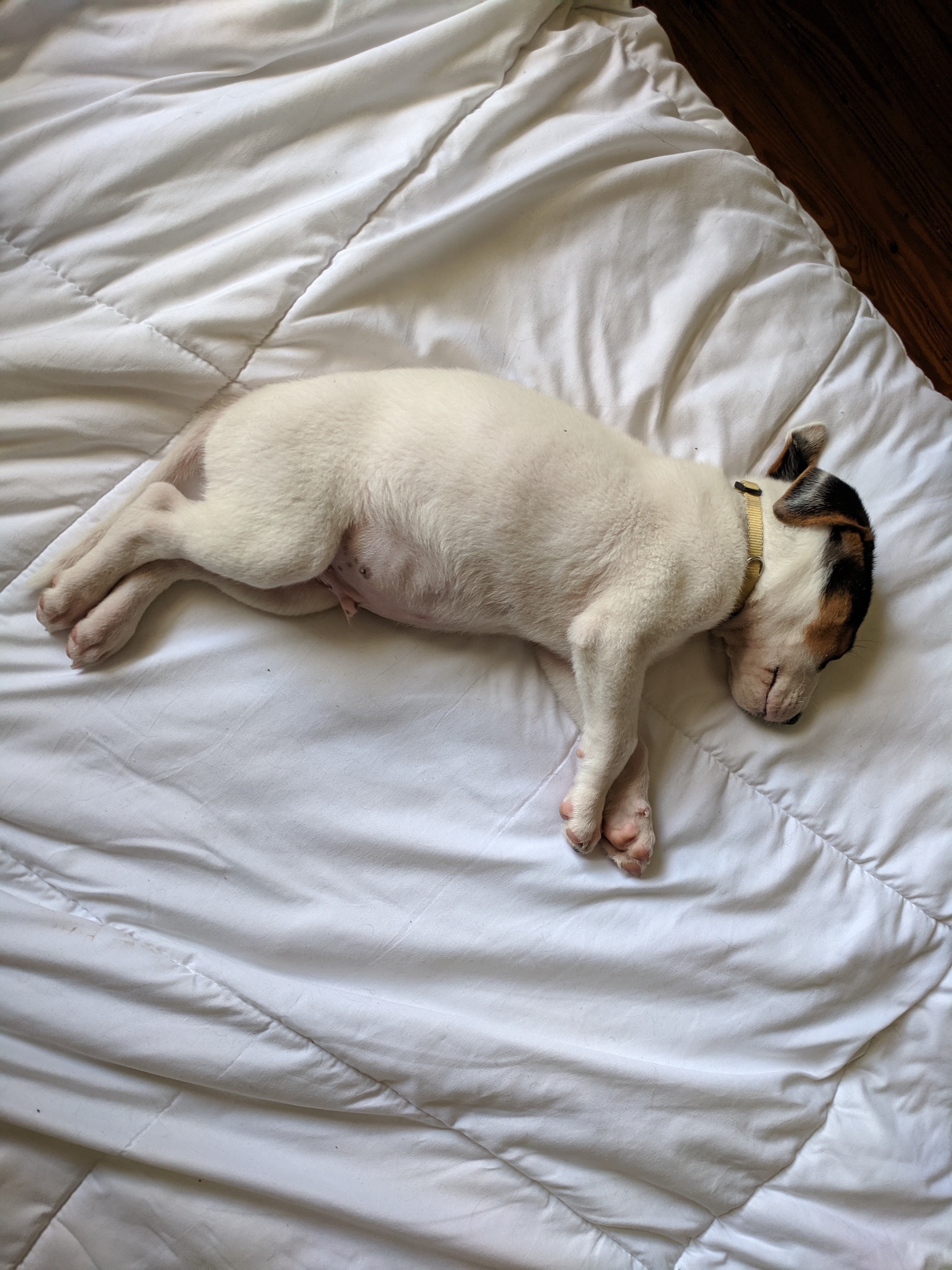 This is a strange feeling. I am not ready. I want the freedom to travel without making arrangements for a dependent. I don’t want the stress of tending to the dog “correctly.” I haven’t a clue if play biting should be allowed because every source says something different and I just know I’m going to fuck him up at least as bad as my own parents fucked me up. Today he used the doggy door for the first time (victory!) but also peed on the couch for the first time (goddamnit). I can’t handle this. 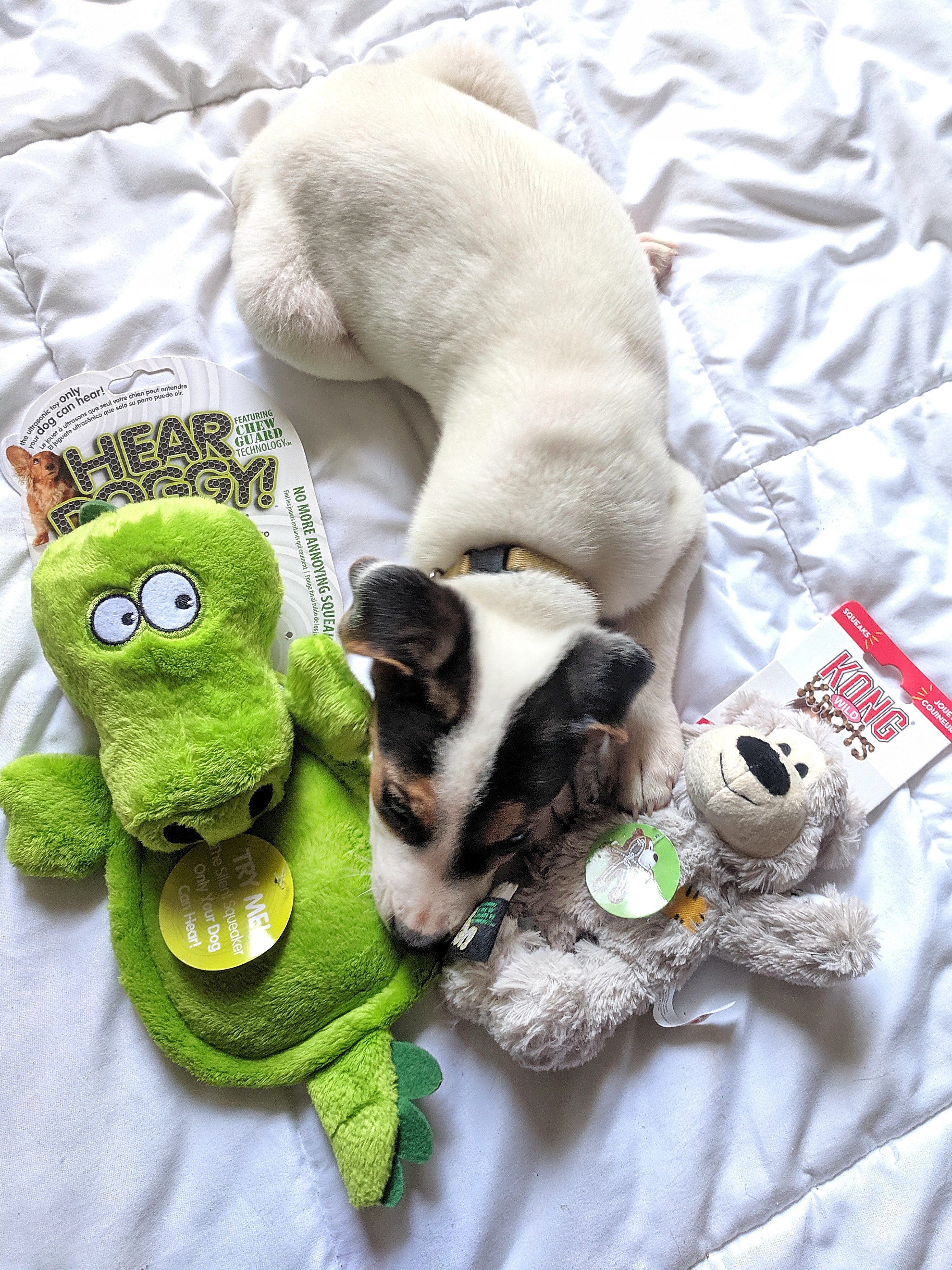 It’s wild, yet not surprising, how much my life has changed because of him. What is surprising is the feeling of “I’m an idiot, I shouldn’t have played the savior and kept this pathetically adorable goober.” My moves are now meticulously calculated and there’s a low-frequency buzz of stress constantly on in the background. All of the things I’ve decided to do for him are controversial because there’s an endless number of opinions on the proper way to raise a puppy. 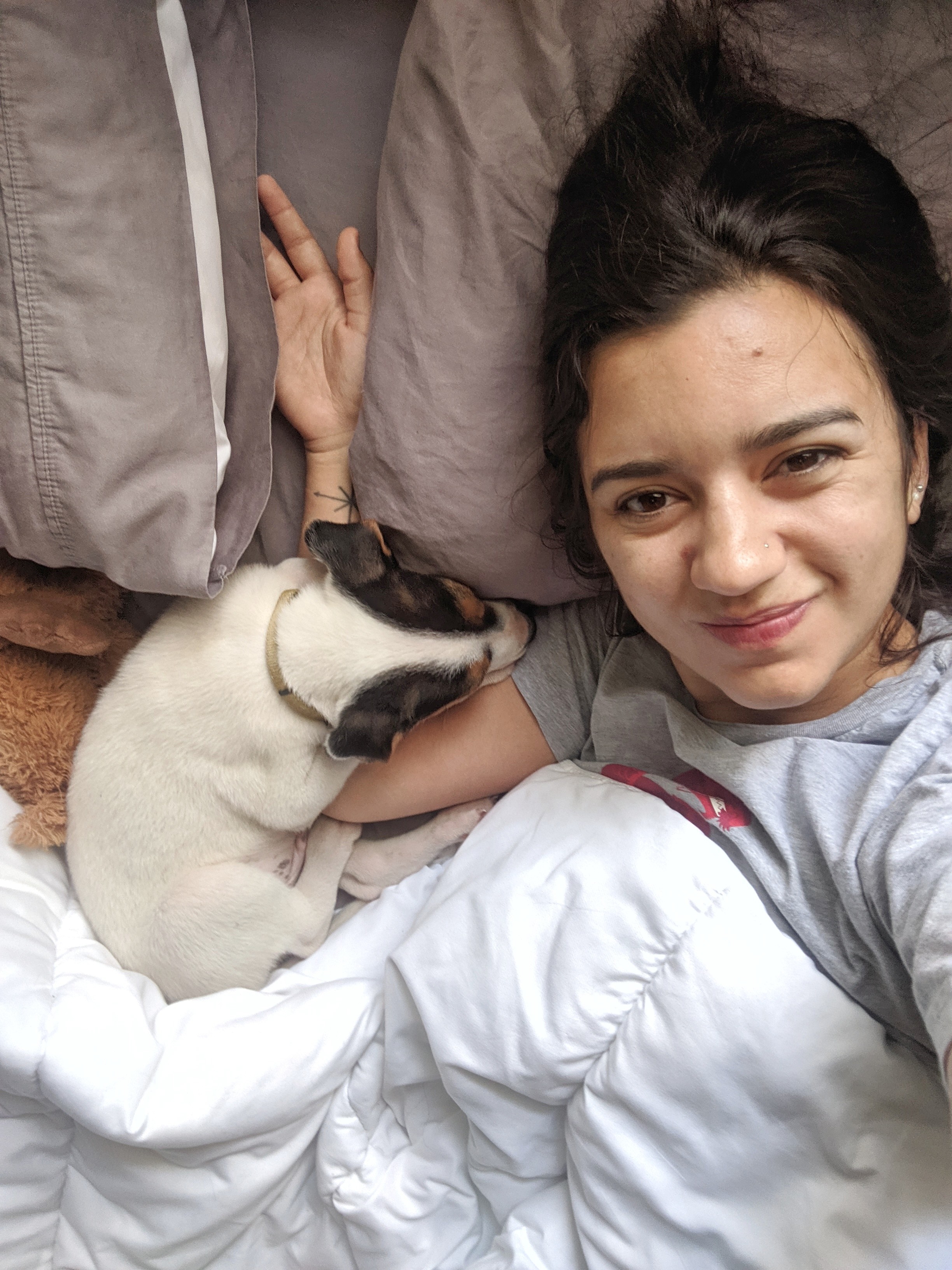 I’m screwing everything up. I’m not ready for this. Also: I would take a bullet for him. Last night I accidently fell asleep before I moved him to the kennel and we cuddled on my bed all night long and I’m not even mad about it but I definitely now have a dog who’s going to end up a serial killer or something. 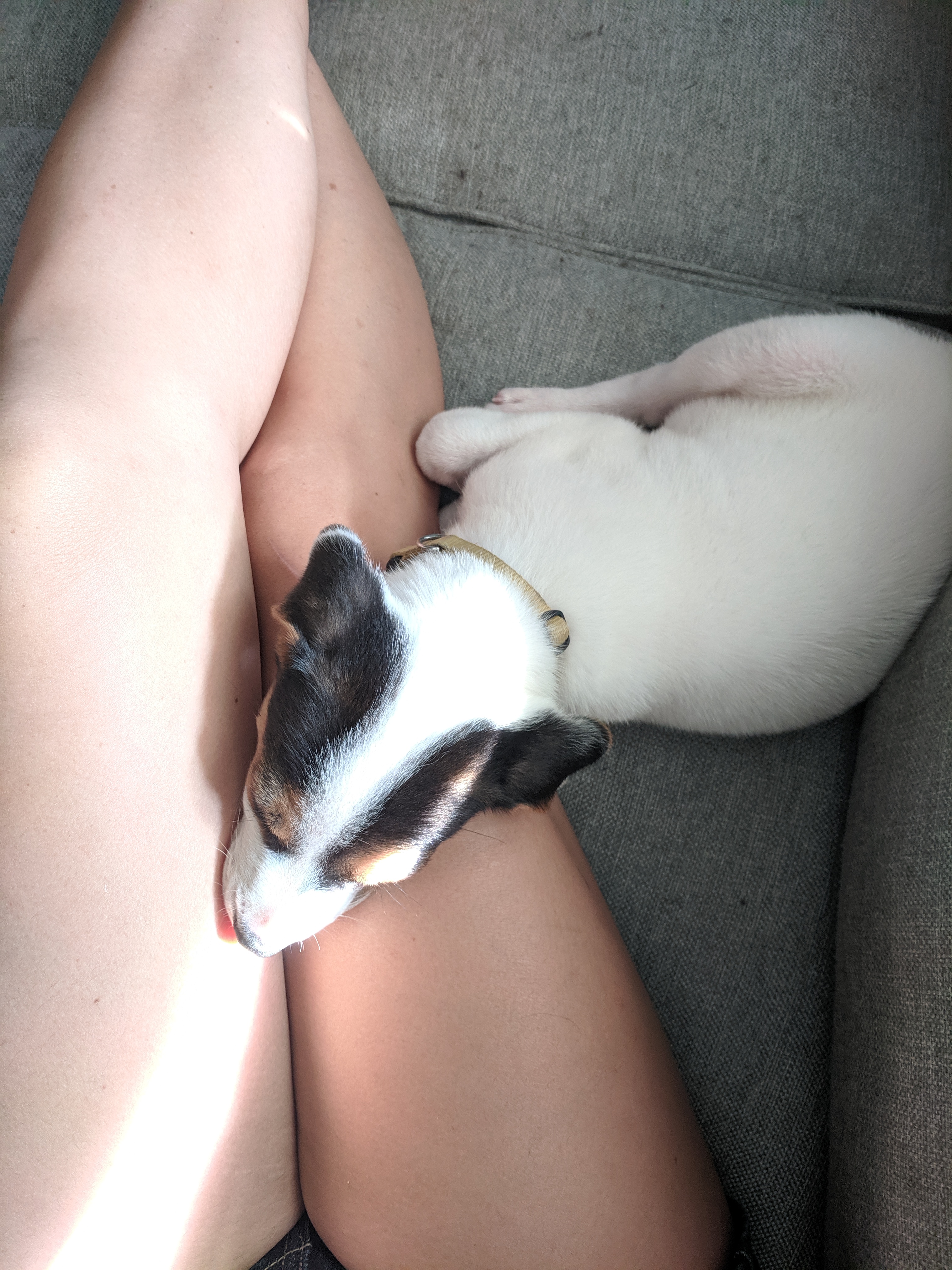 My jerk of a roommate/best friend brought Jed home from dinner one night when he had been turned into the restaurant after being found on the side of the road nearby. When I returned from a trip the next day, it was up to me to decide if I wanted to expedite my personal dog-aquiring venture in an entirely unintended way…or take him directly to the humane society. 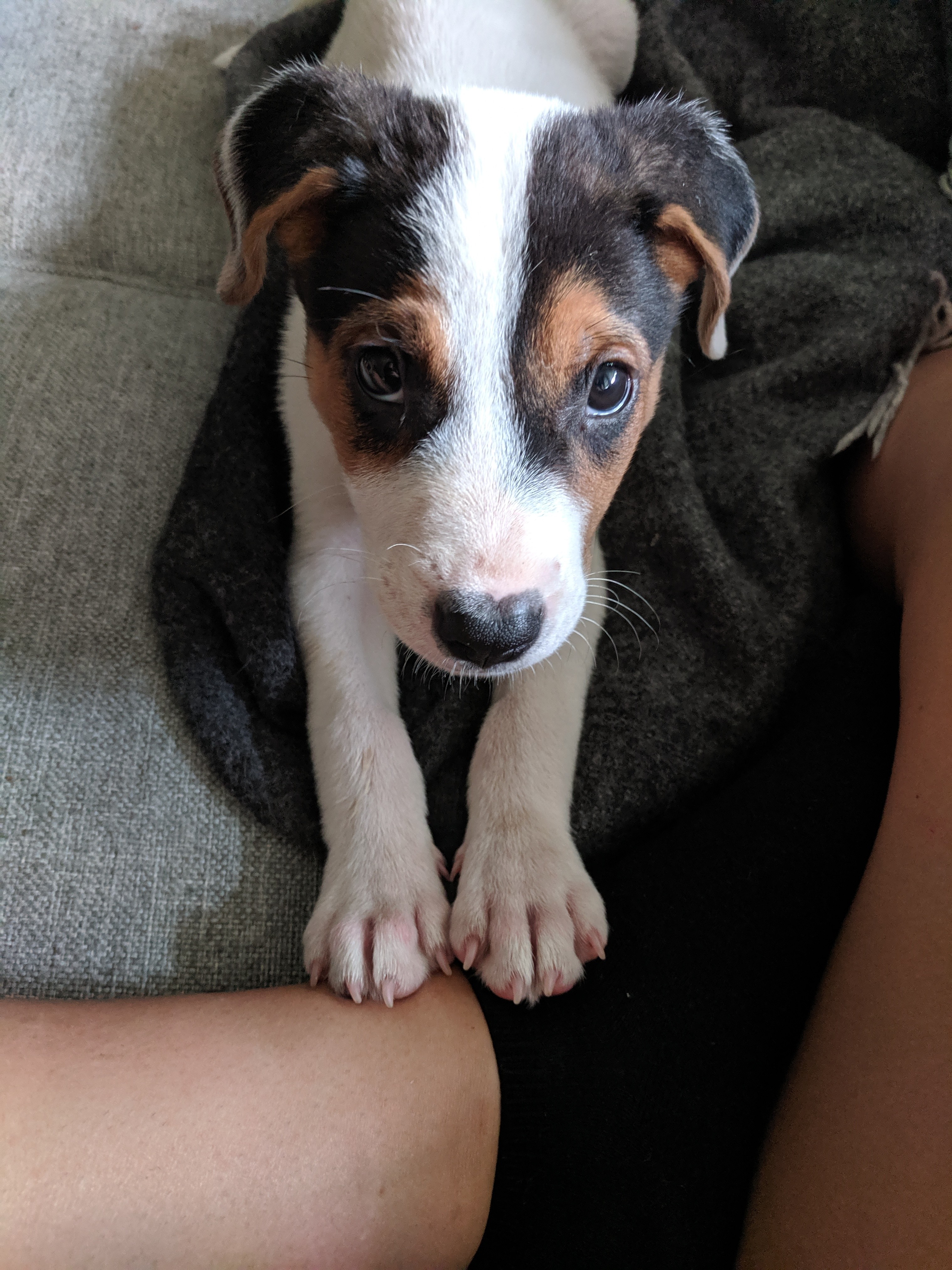 Anyway, now I have a puppy named after a favorite T.V. character and I do things like cry when I watch him sleep on his moose.

I guess my desire to nurture something is finally kicking in. Do you know the word “cockles?” It means the part of your heart that jerky roommates can enter by sticking a puppy named Jed in there and letting him need you more than anything on the planet. Consider my cockles warmed. 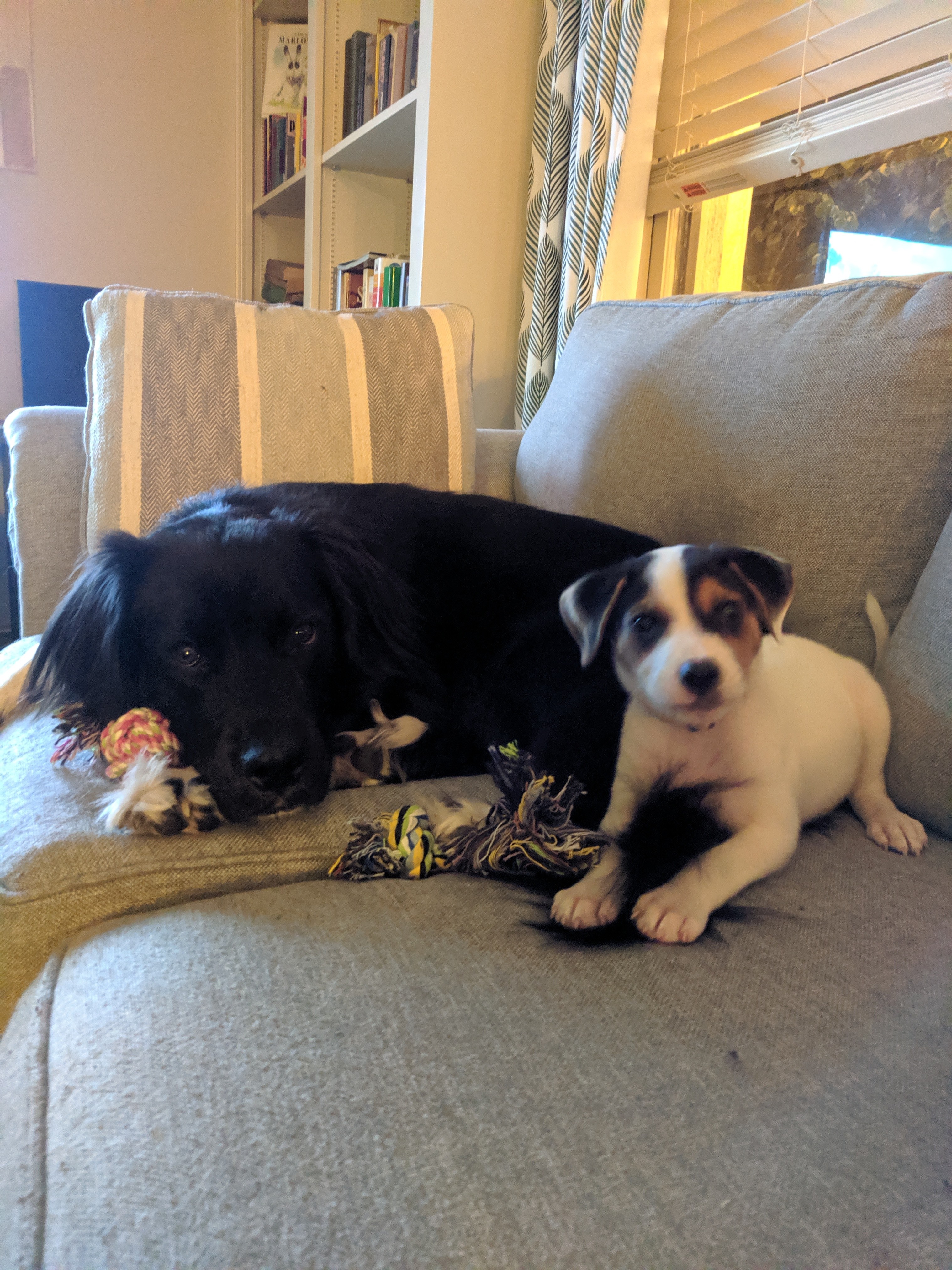 I have a puppy. His name is Jed Barklet. I have no idea what I’m doing, but I logically know that there is no correct way anyway, and yet I still find myself pissed at the world for not providing a plain-as-day rulebook for raising puppies. This isn’t how adulthood was supposed to go. By the time my mom was my age, she had like a thousand kids and a house and a husband and a job and stuff. She also had a miniature schnauzer named Dudley who was the best dog on the planet, and I have no idea how she did it.

I’ve used the Swiffer to wipe up Jed’s pee and I’m not even ashamed.

3 replies to “Reflections on Getting My First Pet”