I moved to Potsdam when I was 19. I had with me only the things I could carry because I was traveling alone. I have been asked a thousand times why I moved from California (celebrities!) to New York (…cold). After all, I was accepted into several schools back home…and other than their music program, the State University of New York at Potsdam isn’t much more special than the next public university. And the last thing I would major in was music.

I don’t understand why people stay near where they grew up for school. My options were:

a) stay in California, where it would take me an extra year or two to graduate due to impacted classes as well as pay a ton for tuition…

b) or go on an adventure to an equally-as-good school in a totally different place and graduate early.

It has been two years, almost to the day, since I both started this blog and moved to Potsdam. I graduated this past December and although the blog shall go on, my chapter in Potsdam comes to a close.

A Summary of the Houses and Roommates

110 Main Street with Andromahi, Carlie, and Emilee
My first place in Potsdam, which I had found on Craigslist. I hadn’t met a single one of these wonderful women before I got here. I still remember our first lunch together at Dexter’s. I remember when Emilee told us she was having a friend over to study and in the morning Carlie, Andromahi, and I saw his shoes still sitting by the front door. Emilee and her study buddy are expecting their first baby any day now.

Andromahi and I had many nights of staying up late studying for whatever (well, she was studying and I was blogging or stalking people on Facebook) and eventually deciding that drinking tea at 2am was a more appealing idea. She told me a story about drinking too much wine with her buddy Allonah, who was eventually to become one of my closest amigos in Potsdam. 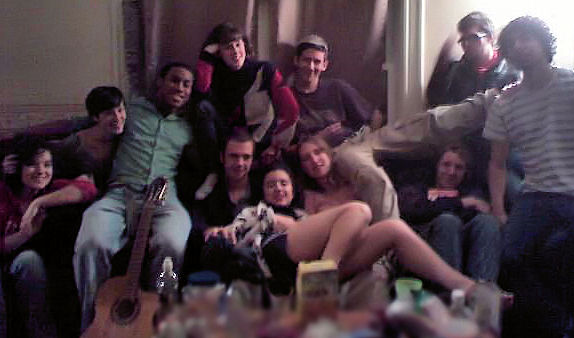 12 Hamilton Street with Amanda
The house I lived in for the longest amount of time while in Potsdam. Amanda and I were constantly working and rarely saw each other, but still managed to have girls nights when we needed them. I think she and I know more embarrassing stories about each other than any roommates in the history of roommates. She put up with my occasional parties on the weekends where I’d invite every sophomore in Potsdam to be stereotypical college students and engage in a little ruckus.

Many, many, many parties where held here. A bad guy broke in one time and we had to call the police (while they were on their way we hid the vodka). 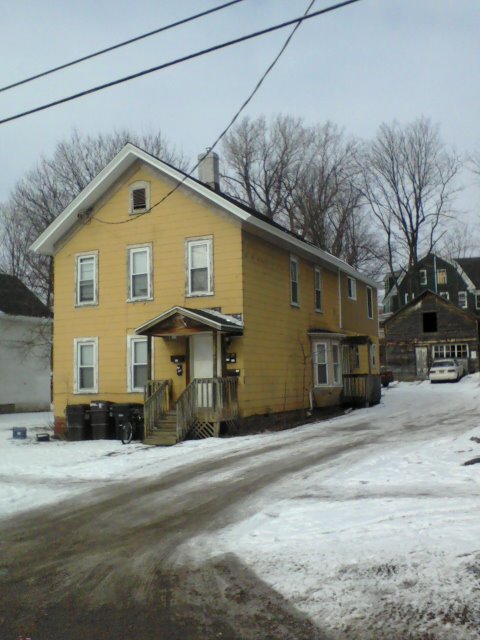 38 Bay Street with Gillian, Jess, Katy, Max, John, Mark, Jesse, and Zach
This was my last house, in which I resided with my crew. Did Deb ever find out about the kitten we were hoarding? How is it that our neighbors never called the cops on us? Who was it that was naked and howling on the roof in the middle of the night again?

It’s almost impossible to talk about all the fun times that were had without providing incriminating evidence of everyone I love most in Potsdam.

I left in this house all of the furniture I have accumulated since living in the Dam. I leave behind most of my household items. Cleaning products, soap pumps, my couches, and food is all yours, 38 Bay. Max, you’ll be happy to hear that I left the crocheted blanket there. You’ll be unhappy to hear that I took my guitar with me.

What Has Happened in Two Years

I completed the pancake challenge at the Village Diner in 17 minutes, and I plan to always keep my “I Ate it All” shirt.

I won an award for an independent undergraduate research project.

I never will forget that godforsaken futon.

On the night of my 21st birthday, I danced with everyone in Potsdam. Including a pretty girl from one of my politics classes.

On the morning after my 21st birthday, I vomited. I vomited a lot.

I fell in love.

I lost a friend for the first time over something stupid.

I met the state senator, on multiple occasions, as well as the state representative.

I travelled to Canada, Vermont, New Hampshire, Pennsylvania, Massachusetts, DC, NYC, Illinois, Washington, and California. Almost all of these trips were on my own.

I got a tattoo. It’s a compass, of all things.

I snuck into bars before I turned 21. I was only carded a couple of times after I turned 21.

On Halloween I went out with Karen and was given a lot of free drinks.

I drove an hour with Andromahi just to get a drink from Starbucks. We ended up going to the mall, too, to justify the trip a little more.

I spoke French in Montreal and got Amanda and I to a bar.

I worked two jobs with awesome bosses (I don’t work for you guys anymore so you know I’m telling the truth).

I carried my trash from 12 Hamilton, down Pierrepont, and around the corner to 38 Bay so my landlord wouldn’t charge me $20.

I spoke with countless Amish people. I played with their children at the bus stop.

And Then Potsdam Ended

I graduated. Then I moved to Montgomery, Alabama.

But I stayed in touch with everyone in New York (and Rhode Island…love you, Jesse) and we all lived happily ever after.

Until we meet again, Potsdam!