My biggest worry about joining the Peace Corps is that I won’t be able to outrun my demons. All of that emotional baggage I’ve collected since birth…it will follow me. I want to join the Peace Corps for all of the good, noble reasons. But I think there’s also a teeny, tiny bit of me that wants to run away from all the bad stuff I’ve ever encountered.

The Peace Corps is an awfully bad bandage, of course. Running off to wherever they’re going to send me won’t fix all of my hostility towards the yucky stuff I’m coping with. That’s not to say that I’ve coped with a particularly large amount of yucky stuff. Only that the yucky stuff I have coped with is awfully yucky for me. There are people I need to apologize to and people who need to apologize to me before I set sail on this epic chapter. And maybe there needs to be a degree of self-forgiveness, too. 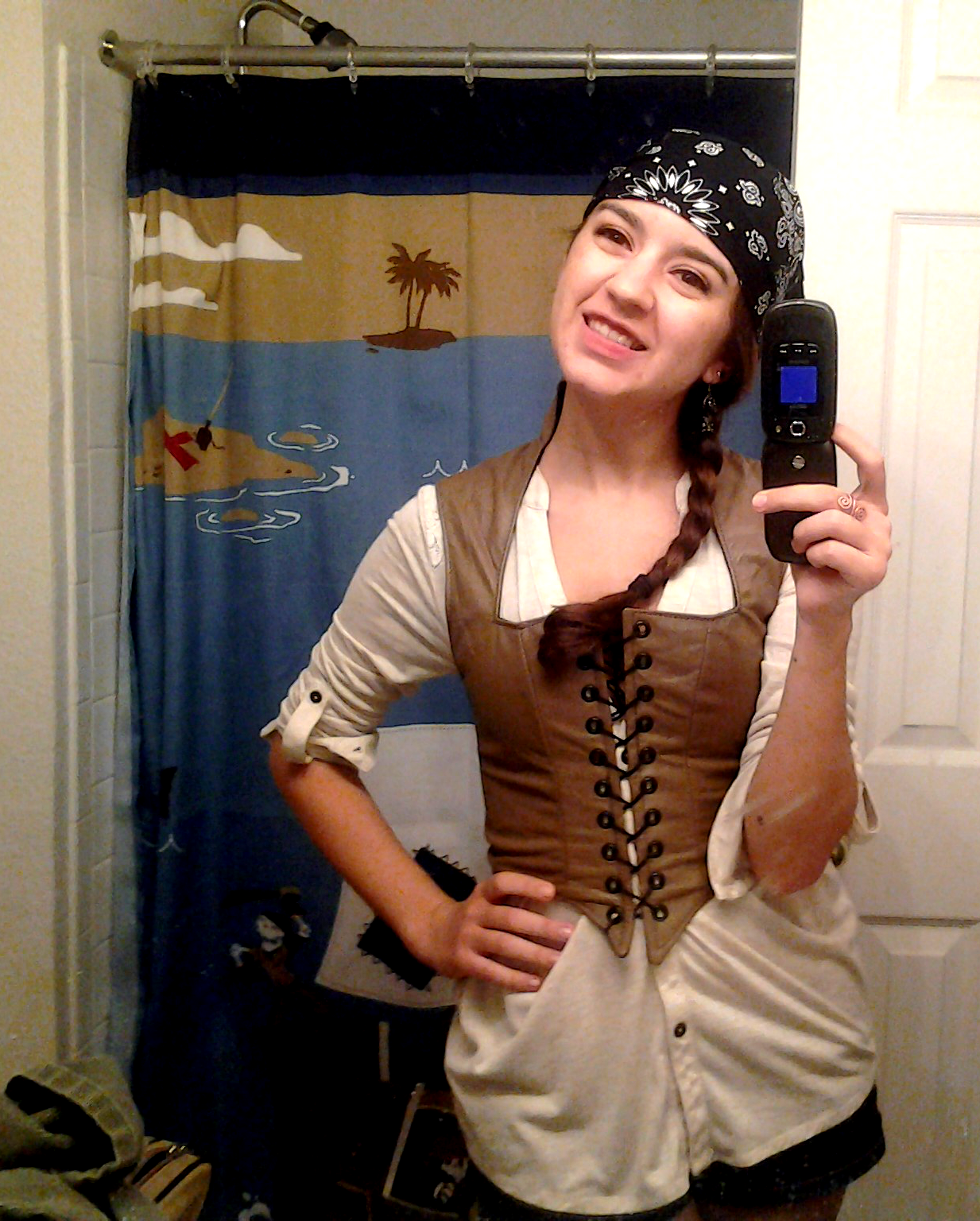 Pirate Liz on Halloween this past year, in front of her pirate shower curtain.

You see, I imagine myself in this glorious mud hut, and I am able to sleep at night because I no longer have nightmares. I no longer have hostility. I no longer hold on to the things that don’t actually matter anyway, but for some reason I think they do matter when I live in America.

They matter when I live in California.

It is important to remind myself, even if I don’t go overseas this time around for one reason or another, that all of my problems still exist no matter where I go.

I have read Peace Corps blog after Peace Corps blog and I still haven’t found it: an experience, a nervousness, a trauma, that relates to everything I am dealing with these days. You should see my acne right now, the stress is really showing itself.

But I found one Peace Corps blog today that said something along the lines of “Don’t swim into the ocean with open wounds. Learn from my mistakes.”

I haven’t a clue exactly what the author meant by that, because that is all she said on the topic…but I think she might mean “take care of your emotional junk before you get to where you’re going.” My nervousness lies in the idea that I might have emotional junk, and that I haven’t a clue how to best cope with it all. Other than to blog to you shittens, of course.

I guess what I’m trying to say is that I’m still coming to terms with the idea that everything exists in the same place. My hurt will still be there no matter which foreign land I’m pirating around, because I will be there. I will still think about it. Mull it over. Cry sometimes. Maybe even cry more. I will be on the greatest adventure of my life, and I will enjoy every moment of it, even the parts that will be hard and that I think I’m not enjoying at the time, and I will be sad for all of the crap I endured in America, and I will return in two years and my problems will still be there because they never ever left.

And I’ll be okay. Bad things happen to everybody. Really, things happen to everybody, and it is my job to just accept that I cannot change the things that have happened to me. The best part is that I have some degree of control over what happens next. And it will be incredibly hard, no matter what major choices I make, to deal with it. But that’s part of the package. And I will lose something, and I will gain something, and I will (hopefully) learn to accept all of those things. I will work to accept my hurt just as much as I accept my joy.