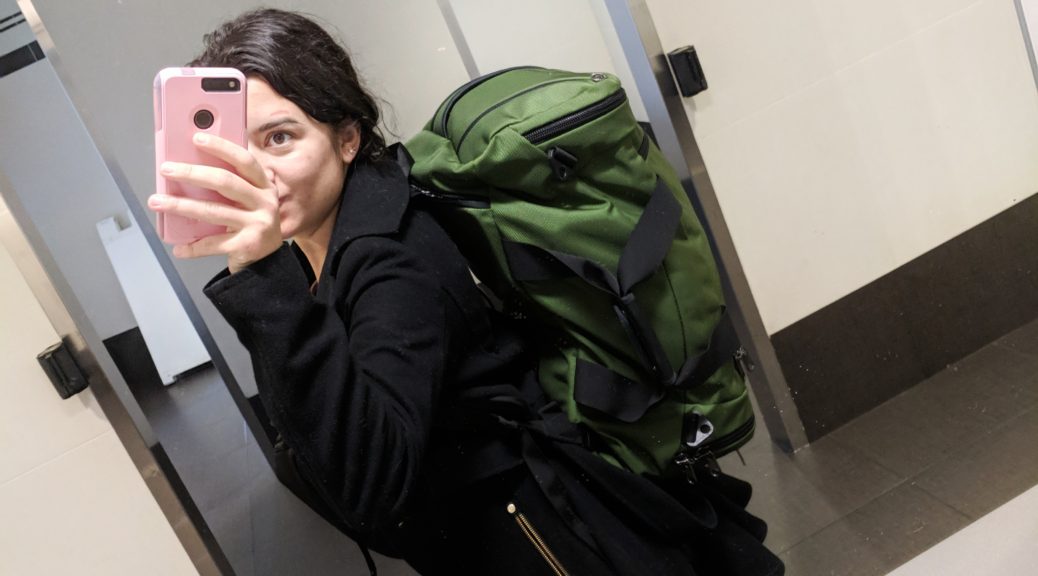 I’m thirty-something thousand feet closer to space right now and my best guess is that we’ll touch down in about thirty minutes, but I don’t care enough to pay to check.

My final act in Montgomery was to scream hysterically at Rebekah as the only logical response to the giant bug I had noticed chilling comfortably in her hair. I thought it was a spider and immediately jumped out of the car to escort the sneak off my friend’s head. The hysteria capped the end of a long morning of nursing a hangover. The hours I should have spent meticulously going over my luggage and tidying up my room were instead spent sipping on ginger ale and telling Maple I love her. I left with my room a mess and my sheets in the dryer. Don’t worry: I did, indeed, manage to shower. You’re welcome, fellow passengers.

I’m on my way to Glendora for one week of Christmas with my family before I fly direct to Paris. I have everything I’m taking with me in the compartment above my head. I’m proud of my minimalist packing job but kicking myself for forgetting a power bank and headphones. I paid a lot of money for airport headphones so Michelle Obama could tell me more about her life.

Earlier this week I completed my Master’s degree in International Relations and several hours later I burned the bajeezus out of my face. My new acne medicine quite ironically makes my skin more sensitive, and that apparently includes to eyebrow wax. To further highlight my newfound fountain of intelligence, I burned myself again later that same day when I surrendered all self control to a bite of still-boiling baked feta. The burn on the roof of my mouth is now mostly healed, but friends are still calling me Harry Potter for the forehead burn (a nickname I am completely relishing).

The captain just announced we’re close, which is obvious from Southern California’s characteristic glitter from it’s urban sprawl. Flying into Los Angeles at night will never not be breathtaking. I’m lucky to get to do it several times a year.

One final thought before I let you get back to your memes: I am surrounded by the most supportive, loving, funny, intentional people. I have been bid adieu like I am dying. You people need to quit saying such nice things to me because I just don’t deserve it.